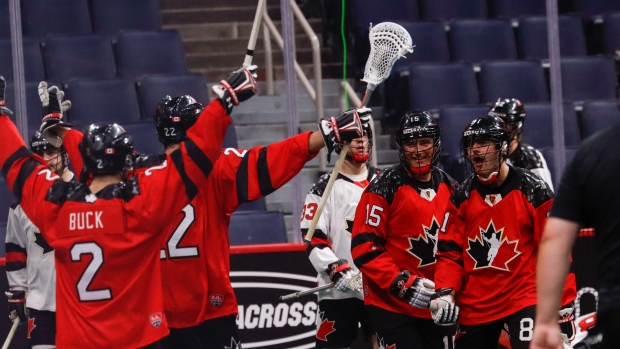 Canada East broke open a 6-6 game with three goals in the first three minutes of the third quarter en route to a 15-9 win over Canada West at the Canada Life Centre in Winnipeg.

East captain Tanner Buck, from Orangeville, Ont., was spectacular, scoring five goals and adding three assists to lead his team to the win in the first game of the three-game, total-goals series.

Liam McGrath, from Halifax, had a hat trick and two assists, while Tyler Davis of Wallaceburg, Ont., and David Anderson of Cambridge, Ont., each added two goals and three assists for Canada East.

Landon Kells, from Fergus, Ont., allowed just three goals in the second half and stopped 40 of the 49 shots he faced to earn the win in net.

The 2021 World Junior Lacrosse Championship was originally slated to have nine nations competing, but COVID-19 challenges and protocols posed insurmountable obstacles for others to attend, so the tournament pivoted to the Canada East versus West format.

Players in the tournament are usually 20 years old or younger, but 21-year-olds, who were eligible to play in the 2020 tournament that had to be cancelled because of the pandemic, are allowed to take part this year.

Canada West held four one-goal leads in the first half, but once Buck scored a power-play goal at 13:14 of the second quarter to put the East ahead 6-5, the eventual winners never trailed again.

Davis scored on a nifty pick-and-roll pass from Buck to open the second-half scoring 1:19 into the third, then Eddie Qu and Anderson connected on outside bounce shots 28 seconds apart to push Canada East solidly ahead.

They wound up outscoring Canada West 4-1 in what proved to be the decisive third frame and won the fourth quarter 5-2 to pull away.​