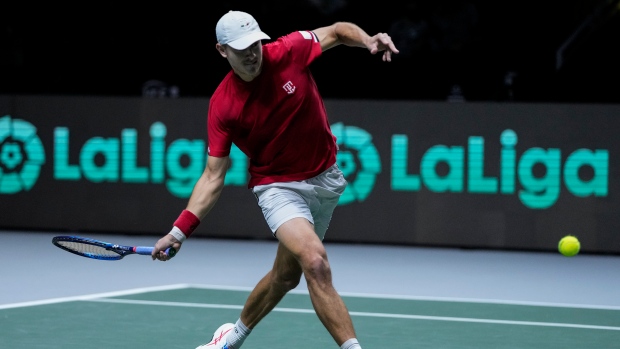 MADRID — There will be no long playoff run for Canada at this year's Davis Cup finals.

The Canadians were eliminated from the men's international tennis tournament Sunday after losing their second tie of the opening round 3-0 to Kazakhstan.

Canada, the Davis Cup runner-up the last time the event was held in 2019, leaves Madrid without winning a match. The Canadians opened with a 3-0 loss to Sweden on Friday.

Canada was missing its two top players, with world No. 11 Felix Auger-Aliassime of Montreal and No. 14 Denis Shapovalov of Richmond Hill, Ont., opting to skip the event after a long season.

Shapovalov was a significant factor in the Canadians' 2019 run, which ended with a 2-0 loss to Rafael Nadal and host Spain in the championship tie.

This year's team of Vancouver's Vasek Pospisil — who was also instrumental to Canada's success at the last Davis Cup — Brayden Schnur of Pickering, Ont., Steven Diez of Toronto and Peter Polansky of Thornhill, Ont., put in a gutsy effort but were unable to get the results needed to move on.

“Overall, I thought the guys played their hearts out this week," Canada captain Frank Dancevic said. "They did everything they could to try and get us through.

"We knew we had to win 3-0 today to have a chance and it was a really, really tough task. But in the end, we’ll keep our heads up, regroup, assess a few things from this week and move forward from here."

“The first set, obviously, I don’t think I played great,” Schnur said. “But it takes some time to adjust to his ball, everything is pretty much underspin on a wooden court that’s bouncing low already and very slow. So, I have zero regrets in the first set, it just took me a little bit of time to find my groove."

Alexander Bublik clinched the tie and sent Kazakhstan to the quarterfinals with a 6-2, 7-6 (6) win over Pospisil. Bublik had 14 aces in the match and saved the only break point he faced, while breaking Pospisil two times on nine chances.

Kazakhstan competed the sweep when Andrey Golubev and Aleksandr Nedovyesov downed Polansky and Schnur 6-4, 6-7 (6), 6-1 in a doubles match.

Kazakhstan finished atop Group B by taking five of six rubbers in wins over Sweden and Canada. It will face the top second-place team to come out of the six groups at the end of the first round.