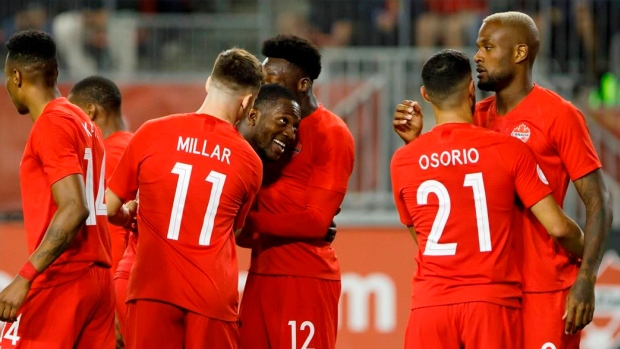 TORONTO — It looks like Canada will slip out of the top six in CONCACAF when the new FIFA rankings come out later this month.

That means the Canadian men will have to maximize points from international windows in March and June and hope El Salvador stumbles in order to return to the top six — and gain a berth in the Hex, the most direct World Cup qualifying route in the region.

While the Canadians stumbled, No. 73 El Salvador blanked the 153rd-ranked Dominican Republic 2-0 and No. 189 Montserrat 1-0 — thanks to a 91st-minute goal — over the past week to win League B Group B. It was El Salvador's fifth win in six CONCACAF Nations League outings.

Current Canada Soccer calculations have El Salvador vaulting over Canada to sixth spot in the region with 1,346 points and Canada dropping to seventh with 1,331. While the gap is just 15 points, it will likely be hard to bridge.

The top six in CONCACAF, which covers North and Central America and the Caribbean, in the June rankings will qualify for the Hex round of World Cup qualifying. From that, three teams will book their ticket to Qatar in 2022.

Teams ranked seven through 35th in the region will have to slog it out in a separate qualifying bracket with the last team standing moving on to face the fourth-placed Hex team to determine who advances to an intercontinental World Cup qualifying playoff.

"We've got to be optimistic ... We've left it to the gods, the football gods, to some degree," Canada coach John Herdman said after the U.S. loss earlier this month. "But we're going to keep pushing at it and I think our luck's going to come our way. It'll come for Canada. We're going to have to make our luck maybe in the March FIFA window and then in the June window. I mean that's reality, to pick up the FIFA rankings points."

Herdman said his team will learn from the U.S. loss.

"For Canada, we missed a big opportunity. I've got to own up to that. We missed a big chance tonight," he said in his post-game news conference in Orlando. "We know we've got the quality because in periods we show we're competing with one of the best teams in CONCACAF."

"We knew that March window was going to be important ... The big question is who wants to play Canada in that window?" Herdman said in Orlando. "We've been working hard behind the scenes to make sure that we've got these teams lined up that can give us a range of points that are realistic for us based on where we're at on our journey."

"As an organization, we'll be ... doing whatever we can to go to the Hex," he added.

Canada can play two matches in each international window, as long as both are in the same region. It can also schedule matches outside the FIFA windows, but such games are worth half the ranking points.

This report by The Canadian Press was first published Nov. 20, 2019.