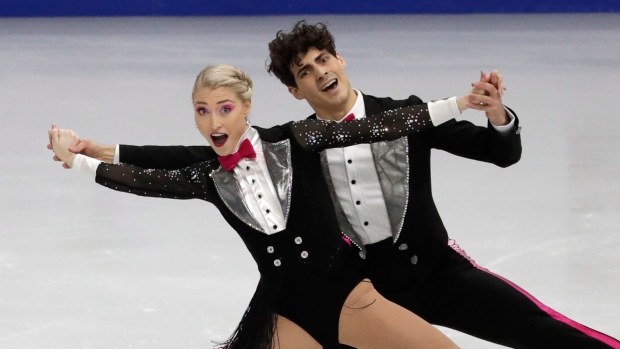 Canada finished the event with two medals. On Friday, Toronto's Piper Gilles and Paul Poirier took the silver in ice dancing and on Saturday Kirsten Moore-Towers of St. Catharines, Ont., and Michael Marinaro of Sarnia, Ont., won bronze in pairs.

In the men's event, two-time Olympic champion Yuzuru Hanyu of Japan won the gold medal with Jason Brown of the United States second and Yuma Kagiyama of Japan third.

Skating to a Beatles medley, Nguyen raised his arms in triumph after producing a clean program.

"I made a mistake on my triple Axel but otherwise I'm really happy with how I came back and pushed to the end," said Nguyen. "Having the crowd with me especially at the end during the step sequence, they really took me there."

Messing was unable to repeat his strong fourth place skate in the short program.

"I felt off physically," said Messing. "I don't feel I've been able to dedicate myself to my training as efficiently as I needed between nationals and here. It just wasn't enough time to prepare myself fully for this event. My legs always felt a little bit behind me."

For the 20-year-old Sadovsky it was all about gaining experience.

"The big thing I'm going to work on is my consistency," said Sadovsky. "The short was disappointing here, the long could have been better, but I'm not beating myself up too much about it."