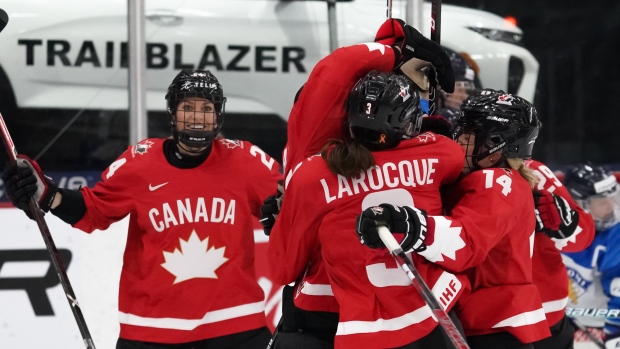 CALGARY — Canada's first women's world hockey championship game in over two years was a hard-fought 5-3 win over Finland, and the battle felt like sweet relief for Canadian captain Marie-Philip Poulin.

"To be honest, it's hard to put into words, just watching the video before the game on the blue-line and when they said the world championship was finally open, to be honest, it gave me shivers," Poulin said.

Poulin, Erin Ambrose and Jamie Lee Rattray also scored for the host Canadians, who trailed by two goals after the opening period.

Minnamari Tuominen, Nelli Laitinen and Elisa Holopainen replied for Finland, with Anni Keisala turning away 39 shots in the loss.

The Czech Republic downed Denmark 6-1 in Pool B earlier Friday as the 10-country women's championship got underway 859 days after the last one in Espoo, Finland.

The 2020 and 2021 tournaments scheduled for Halifax and Truro, N.S., were both cancelled because of COVID-19 concerns.

When Nova Scotia pulled the plug on the tournament in May, Hockey Canada rescheduled and relocated the tournament to Calgary in summer less than six months out from Beijing's Winter Olympics in February.

Poulin barely played in Espoo because of a knee injury, so the gap felt even longer for the 30-year-old from Beauceville, Que.

"Bringing back that jersey for an international game was very special today," Poulin said. "We've been waiting for that moment for a long time."

When Holopainen drew the Finns even at 7:13 of the third period, Fillier scored a go-ahead goal 25 seconds later.

The 21-year-old from Georgetown, Ont., is one of eight players making their world championship debut for Canada in Calgary.

"They're the types of shifts that we have to win momentum or gain momentum back and usually good players and goal scorers find ways to contribute in those times," Canadian head coach Troy Ryan said.

"Not only was it a confidence boost builder for her, I thought it was awesome for our team to regain momentum after that tying goal."

Canada didn't play in a world championship final for the first time in the history of the tournament in 2019 after a 4-2 loss to Finland in the semifinal.

Canada took the bronze medal, while the host Finns fell 2-1 in a shootout to the United States in the gold-medal game in Espoo.

Canada's 4-1 pre-tournament win Wednesday over Finland was the first meeting between the two countries since that semifinal.

Down 2-0 in Friday's opener, Canada swarmed the offensive zone for a second-period 25-2 edge in shots, and scored twice in a 20-second span to pull even.

"I don't think we entered the offensive zone, not even once in the second period," Tuominen said.

"We just need to focus on getting out of our zone and getting the puck deep and getting changes. Then we get fresh legs on the ice and maybe create something other than just playing d-zone."

Holopainen pulled the Finns even with a backhand tip between the pads of Desbiens, but Fillier quickly responded when Spooner fed her in the slot from behind the net.

Canada led for the first time in the game early in the third period when Jenner's redirection deflected off Ambrose and by Keisala.

Poulin wired a wrist shot past Keisala right after Rattray scored at 14:41 during a goal-mouth scramble in the second period.

Finland's power-play went 0-for-11 in the tune-up, but converted its first chance Friday to spot the visitors a two-goal lead by 6:05 of the opening period.

Tuominen scored five-on-three. Laitinen's off-speed deflection of a Sofianna Sundelin shot spun by the glove of Desbiens at 2:25.

"We were better in the first period actually and played a wonderful period," Mustonen said. "I'm actually quite satisfied with the way we played when you look at the whole game.

"Knowing this wasn't our best game we will play here in worlds, we will try to play better and better, so it will be interesting to see what happens."

Canada meets Russia in Pool A on Sunday, followed by Switzerland on Tuesday and the U.S. on Thursday.

The quarterfinals Aug. 28 are followed by the Aug. 30 semifinals and medal games Aug. 31.

Hockey Canada didn't sell tickets for the preliminary round, but allows a maximum of 120 family members into a dedicated section of WinSport's Markin MacPhail Centre if they wear masks and don't have COVID-19 symptoms.

No player, official or team staff member had tested positive for the virus since the 10 teams entered the tournament bubble Aug. 10, the International Ice Hockey Federation said Friday in statement.

Finland is minus star goaltender Noora Räty, whose combined 93 saves in the 2019 semifinal and final earned her the award for the tournament's top goaltender.

Räty didn't join the Finnish team this summer because she couldn't financially afford to leave her Minnesota goaltending school this summer, she told the Finnish media outlet Ilta-Sanomat earlier this month.

Keisala proved able to fill the void with save after save to make Canada work for the victory.

"She's been the best goalie in Finland the last year," Mustonen said.

Notes: Rosters were expanded to 25 players from 23 for this world championship for extra personnel in the event of injury . . . Canadian forwards Laura Stacey and Kristin O'Neill and goaltender Kristin Campbell were scratches Friday . . . Finnish defender Jenni Hiirikoski joined Canada's Hayley Wickenheiser and countrywoman Karoliina Rantamaki for participation in the most world championships at 13. At 69 career games, Hiirikoski is one off the record for the most games played.