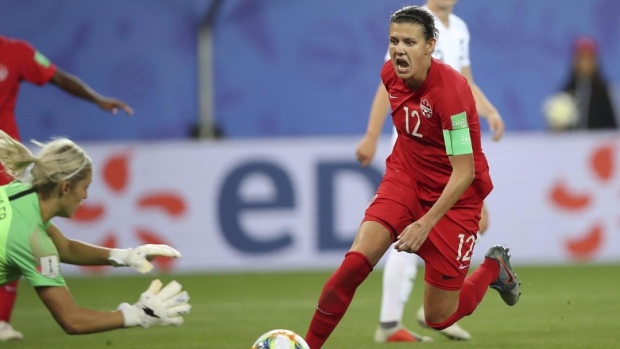 The path to a third consecutive podium for Canada’s women’s soccer team is now clear after Wednesday’s draw to determine the groups for this summer’s Tokyo Olympics.

Canada will play in Group E with hosts Japan, Great Britain and Chile. The Canadians will begin the tournament on July 21 against Japan. They then face Chile on July 24 before wrapping up the group stage versus Great Britain on July 27.

“Now that we know our pathway at the Tokyo 2020 Olympic Games, I’m excited, the players are excited and we are ready to ramp up our preparations further to achieve our goals,” head coach Bev Priestman said.

“There is no easy opponent in a women’s Olympic football tournament, but we will do everything in our power to make Canada proud. With hard work, the right mindset and a strong belief in our individual and collective ability, Canada can give any team a really difficult game and ultimately succeed in an Olympic Games.”

This summer’s Games are taking place after the event was postponed last year due to the COVID-19 pandemic.

The Canadians, ranked eighth in the world, are coming off back-to-back bronze medals at the 2012 and 2016 Olympics and are aiming to become the third team to ever reach three straight podiums in women’s football at the Olympics. The United States won five straight medals from 1996 to 2012, and Germany took home three consecutive bronze medals in 2000, 2004 and 2008.

The top two teams in the three groups will advance to the knockout round, along with the two best third-place teams.

Here’s a closer look at who Canada will face in the group stage.

The host nation is back in the Olympics after failing to qualify for the 2016 Rio Games. This will be the fifth appearance in the Olympics for the Nadeshiko. The team’s best finish came in 2012, when they lost 2-1 to the United States in the gold-medal match.

The silver medal came during a dominant stretch for the Japanese women. They won the 2011 FIFA Women’s World Cup after upsetting the Americans in penalty kicks. They repeated as finalists in the 2015 World Cup but wound up losing 5-2 in a rematch with the United States.

Japan entered a rebuilding phase after 2015 and has fallen out of the top 10 in FIFA Rankings, but they should not be underestimated. At the 2019 World Cup, the Netherlands, who would finish in second place, just squeaked past the Nadeshiko in the round of 16. It took a penalty kick in the 90th minute from Lieke Martens to secure the win for the Dutch.

In their most recent meeting on Oct 6. 2019, Canada was embarrassed by Japan 4-0, the worst defeat suffered by the Canadians in almost seven years. Canada has one win against Japan in their past five matches, dating back to 2012.

One of those losses came at the London Games, the only previous Olympic meeting between the two sides. Japan won 2-1 in the first match of the group stage.

Great Britain represents the United Kingdom in the Olympics, with players from England, Scotland, Wales and Northern Ireland eligible for the squad. England is the highest-ranked team of the four nations (sixth in the world), and it was the Lionesses’ fourth-place finish at the 2019 World Cup that qualified Great Britain for the Olympics as one of the top three European finalists at that tournament.

With England’s interim manager Hege Riise also in charge of Great Britain for the Tokyo Games, it’s expected that the team will largely consist of players from the English national team, which was the case in 2012, the squad’s only previous appearance at the Olympics.

In the London Games, Canada eliminated Great Britain with a 2-0 win in the quarter-finals. Christine Sinclair scored the second goal in the 26th minute on a free kick.

The English national team has been struggling since finishing fourth at the 2019 Women’s World Cup. The Lionesses have two wins in their past six matches, and one of those came against 55th-ranked Northern Ireland.

In a pair of friendlies this month, England lost 3-1 to a France team that was missing many of its key players and 2-0 to Canada.

The Canadians have won three of their most recent meetings with England, but the lone loss came in the 2015 Women’s World Cup, when the Lionesses eliminated the Canadians with a 2-1 win in the quarter-finals.

Chile will be making its Olympic debut, two years after its inaugural appearance in the Women’s World Cup.

The South American side qualified after winning the two-leg playoff with Cameroon, advancing 2-1 on aggregate. The matches were originally scheduled to take place in April 2020, with a game each in Chile and Cameroon, but the playoffs were postponed due to COVID-19, and both legs were held in Turkey this past month.

At the 2019 Women’s World Cup, Chile was in a tough group with the United States, who would go on to win the tournament, and Sweden, who finished third. Although the Chileans wouldn’t make it to the knockout round, they did earn their first World Cup win when they defeated Thailand 2-0.

Chile is led by Christiane Endler, the team’s captain and one of the top goalkeepers in the world. Canadians Ashley Lawrence and Jordyn Huitema will know Endler well, as the three are teammates with top club Paris Saint-Germain. Last year, in The Guardian’s annual list of the 100 best players in women’s soccer, Endler placed 22nd and was the top-ranked keeper.

Canada has only faced Chile once before, which came over seven years ago. The Canadians lost 1-0 in the second game of the 2013 Torneio Internacional de Futebol Feminino in Brasilia.