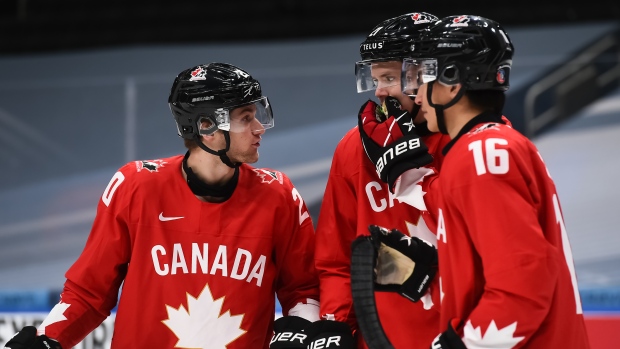 Team Canada head coach Andre Tourigny conceded on Friday that Montreal Canadiens prospect Kaiden Guhle struggled in the 2-0 gold-medal game loss to the United States, but didn't lay any blame at the 18-year-old defenceman's feet for the loss.

"Yeah, he had a tough, tough go," Tourigny told TSN Radio 690's Montreal Forum with Tony Marinaro. "[In] his defence, we had a little bit of the wrong matchup. When he was playing against [Trevor] Zegras’s line – the time you saw him struggle in that game, he was matched against the first line. Because we got caught on the rotation early in the first – for example, on the goal against – and I think it was tougher for him, but he wasn’t the only one. I think he struggled when all five [other] guys were struggling on the ice, as well."

Tourigny said that pointing out his struggles doesn't mean that he's pointing fingers at the 16th overall pick in the 2020 NHL Entry Draft.

"We had a few situations where we had a bad shift and [Guhle] was one of those guys," Tourigny said. "Like I said to someone yesterday, I don’t blame him. Did he make a mistake? Yeah. But there’s a difference in saying ‘This guy made a mistake’ and saying ‘This guy has to take the blame for a goal or play.’ I think [Guhle] was really good for us, but there were moments in that game where he had difficulties.”

The Ottawa 67's bench boss says he remains proud of his team's efforts and that making any kind of excuses for the loss is unacceptable.

"You don’t look for excuses -  you look for solutions and you do the best with what you have," Tourigny said. "Without Kirby Dach, without Alexis Lafreniere, with 19 days of quarantine, 14 in Red Deer and five in Edmonton, with injuries, with all of that, we still gave up in the first six games of the tournament – plus the pre-tournament games – no goals at five-on-five to that point and only four goals in seven games. We scored a million goals. I don’t know how many – 40-something, but I’m not looking for excuses.

"I’m really, really proud of the boys because they’ve been put in a situation where, you mentioned a few factors – they didn’t have a season, the adversity and they reacted well all the time, so for me, it was two really good teams in the final and we played really hard. We pushed back really hard. And the Americans gave up 19 scoring chances at five-on-five in the four games leading to that game. They were really stingy. We found a way to create more than a dozen scoring chances against them – at five-on-five – in the final, which is almost even with the total they gave up in the four games."

The 46-year-old Nicolet, QC believes that the high expectations that come annually from Canadians fans is one of the things that gives the World Junior Hockey Championship its allure and its gravity in this country.

“It goes with the territory," Tourigny said. "We had the support of so many people during the tournament and it makes that tournament so special. I think it’s important to not forget where you’re coming from. When you have all that support, all that love, you appreciate it. So when things don’t turn out the way you want, you cannot hide. You need to face the music.”