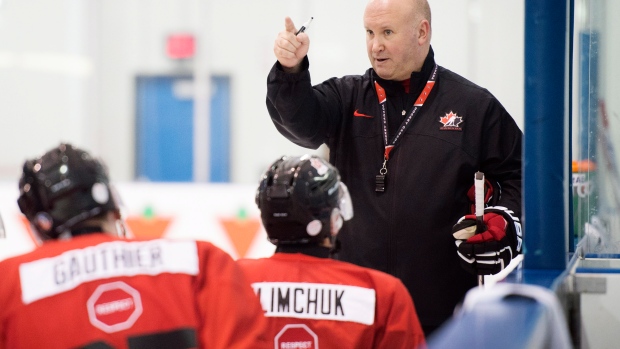 TORONTO - During Canada's first practice at the world junior selection camp the players worked on blocking shots with assistant coaches firing foam pucks at them from a few feet away.

Sure enough, the players had to do the drill again on the second day of camp.

"I noticed that many of them were not used to it and I expect them to get much better by the end of this camp," Groulx said.

The message was received loud and clear.

"It kind of shows that everyone is going to have to do that," said Sam Reinhart, the second overall pick in last June's NHL draft. "Everyone's going to have to buy into different roles and being in different situations. I think that's an important statement."

Players struggled to stay upright while going down on one knee and directing their shin pad at the shooter. It is a technique championed by Groulx, but unfamiliar to most of the 30 guys at the camp.

"I don't know about technique," said London Knights forward Max Domi. "I usually just kind of look at the puck and hope it hits me and it's going to hurt. This technique makes a huge difference. You don't feel it. It actually hits your equipment. I'm used to taking them off the ankle so this helps a lot."

"Many of them on their [CHL] teams are playing 20, 25 minutes a game," said Groulx, who coaches the Gatineau Olympiques in the QMJHL. "They are the go-to guy on their team and sometimes they aren't counted on to block shots, because they're too important for the team and they don't want to risk that injury."

But Groulx has had a constant message since camp opened on Thursday: his players will be aggressive and they will not be outworked.

"Everyone has to block shots whether you're a 100-point guy or a 30- or 40-point guy," said Oshawa Generals forward Michael Dal Colle, who arrived at the camp riding a 15-game point-scoring streak. "Everyone's got to play well on the defensive side of the puck as well. We have a lot of offensive guys here, but we'll have to play different roles."

Canada will hold a pair of scrimmages against a team of university all-stars on Saturday night and Sunday afternoon. The games are key in determining who will be among the eight players cut by the coaching staff. And Groulx said he isn't simply evaluating talent.

"I think attitude is key because they're all talented, the best in our country in their age group, and I think their attitude is something we're looking at closely.

"It's about the way they are competing: the way you forecheck, the way you back-check, if you're blocking shots and if you can adapt to your role."

On Saturday morning, Groulx was barking at his players to skate hard off the ice at the end of a shift in a drill.

"We want to be a four-line team so we're not going to have a guy playing 25 minutes," the coach said. "They cannot be out there for a 1:10 or 1:20 shift. They have to be out there shorter. Go short and go hard.

"There are many guys that have a lot of things to prove."