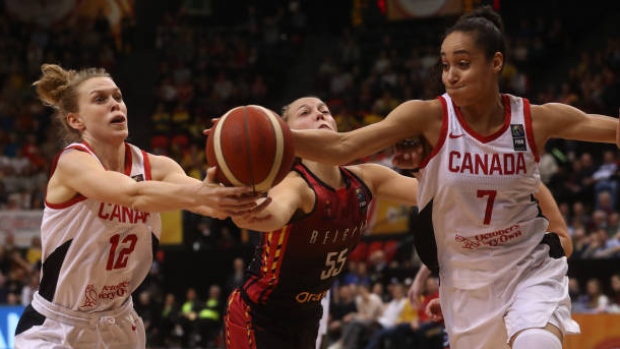 OSTEND, Belgium — Canada's women's basketball team survived a scare and held on for a 61-56 win over host Belgium on Thursday at an Olympic qualifying tournament.

"That was a great way to start the tournament and a great team win," Nurse said. "The morale was extremely high, the passion, the excitement to be here, being in this position to have opportunity to do something special to get to Tokyo."

Hanne Mestdagh's three-pointer with 2:05 remaining in the fourth quarter cut Canada's lead to 58-56 and got a vocal sellout crowd in Ostend roaring.

Canada prevented the Belgians from scoring for the remainder of the game, however, and Kayla Alexander hit two free throws with 10 seconds remaining to all but cement the win.

Belgium turned the ball over on its next possession and Kim Mestdagh was forced to foul Nayo Raincock-Ekunwe, who made one of two free throws to give Canada a five-point lead with just seven seconds left.

Kim Mestdagh then missed on a three-point attempt at the buzzer that wouldn't have been enough even if she sank it.

"(Playing in front of the sold-out Belgium crowd) was an absolutely insane environment to play in," Nurse said. "But I'm so proud of our team and the way we fought. Everyone came in and contributed in their own way and I think that was something that was really exciting for us."

Alexander had 12 points on 5-of-7 shooting. Bridget Carleton and Raincock-Ekunwe had six rebounds apiece.

"Those are great games to be a part of," Canada head coach Lisa Thomaidis said. "We've played in a few of these now and the more we’re in them, the better we respond to them. We had a lot of players who played big moments and tonight shows how we can handle them, ride those waves and handle the momentum shifts and still come out on top. It was fun."

Canada's record in qualifying improved to 9-1. They went 5-1 in Puerto Rico, losing only to the United States, then 3-0 in Edmonton.

Canada next faces Sweden on Saturday before taking on Japan on Sunday. A win over Sweden will clinch an Olympic berth.

Because Japan has an automatic Olympic berth as host, the Canadians need only to finish ahead of either Belgium or Sweden in the group to qualify for the Olympics. Japan downed Sweden 75-54 on Thursday.

This report by The Canadian Press was first published Feb. 6, 2020.