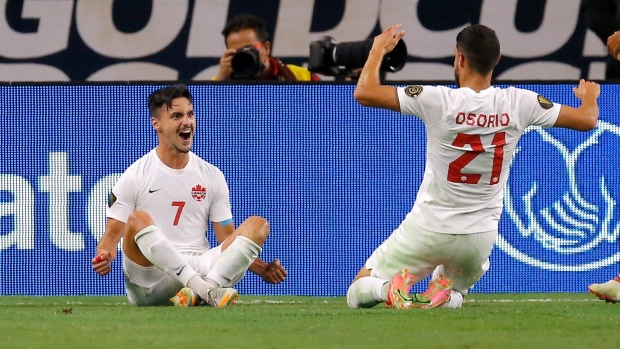 ARLINGTON, TEXAS — Canada's run at the Gold Cup continues. And that can only bode well for the final round of World Cup qualifying starting this fall.

Stephen Eustaquio set up one goal and scored the other Sunday to move the 70th-ranked Canadians into the semifinals of the CONCACAF championship with an impressive 2-0 win over No. 50 Costa Rica.

Eustaquio put Junior Hoilett in alone for the first goal at the 18th-minute mark, then scored himself in the 68th minute as the Canadian men took control early and never let go.

"I'm proud of these boys tonight," said Canada coach John Herdman. "That was a big step they took. And hopefully we can take another one."

A stiffer test awaits. The young Canadian side — five of Sunday's starters had fewer than 10 caps going into the game — faces 11th-ranked Mexico in Thursday's semifinal in Houston. The Mexicans blanked No. 67 Honduras 3-0 on Saturday.

The other semifinal pits the 20th-ranked U.S. against No. 58 Qatar, a guest entry as 2022 World Cup host, in Austin, Texas. Qatar advanced by beating No. 69 El Salvador 3-2, hanging on after building a 3-0 lead Saturday.

The Americans defeated No. 45 Jamaica 1-0 immediately after Canada's game indoors at AT&T Stadium, home of the NFL's Dallas Cowboys.

The Canadian men came into the game with a 5-7-9 record against Costa Rica, with wins hard to come by for either side in recent years. Canada was winless in five (0-1-4) against the Costa Ricans.

But Canada was full value for this victory. A veteran Costa Rica side had trouble getting going, showing little offence.

"We got eliminated by a team that played better than we did," Costa Rican coach Luis Fernando Suarez said through an interpreter.

Like others at the tournament, Canada does not have all its weapons on hand.

Canada (3-1-0) lost Alphonso Davies to an ankle injury in the buildup to the tournament, with forwards Ayo Akinola and Cyle Larin exiting after sustaining injuries in the 1-0 loss to the U.S. last Sunday.

Others who did not come to the tournament include Jonathan David, Atiba Hutchinson, Scott Arfield and Milan Borjan.

Still, the Canadians beat Martinique and Haiti by 4-1 scores before finishing off group play with the narrow loss to the Americans.

"I think we've deserved to win all four matches that we've played in the tournament so far," said Herdman, whose team is 9-1-0 this year.

The Canadian men last made the Gold Cup semifinals in 2007 when they lost 2-1 to the U.S. Canada also made the final four in 2002, when it beat South Korea to finish third.

The Canadians exited in the quarterfinals of the last two editions of the tournament.

Canada won the Gold Cup in 2000. It was also victorious in 1985 in its previous incarnation as the CONCACAF Championship.

Mexico will be a tough ask, especially at NRG Stadium in Houston where the crowd will be pro-Mexican.

Canada last beat the CONCACAF powerhouse in February 2000, a 2-1 decision in San Diego, and its record against the Mexicans over the last 20 years is 1-11-3 with the Canadians outscored 40-10. Canada is on an eight-game winless streak (0-6-2), losing the last four matches while being outscored 10-1.

"It will be a tough night for those guys," Herdman said, referring to his defenders. "But it's what we want.

"We want these games. We said coming into this tournament, we want Mexico, we want the U.S., we want Honduras, Jamaica. Because we're going to get them soon enough in a moment where it's going to matter even more to our country.

"Our eyes are here at the Gold Cup but there's still, for me, one eye on what's coming next."

That would be the final round of World Cup qualifying in the region that covers North and Central America and the Caribbean, with Canada joining the U.S., Mexico, Costa Rica, Honduras, Jamaica, Panama and El Salvador in the final CONCACAF battle for berths in the 2022 World Cup.

"We have big goals," he said. "We want to get to the World Cup and in order to do that you've got to play against big teams. We embrace every challenge and we're excited to be in the semifinals and have an opportunity to play Mexico."

The only blemish Sunday was captain/defender Steven Vitoria and striker Lucas Cavallini were both yellow-carded by American referee Jair Marrufo, meaning they will miss the semifinal for a second caution.

Canada dominated early with almost 70 per cent possession in the first 10 minutes. And it went ahead in the 18th minute after Eustaquio found Hoilett behind the defence with a wonderful long ball.

Racing into the penalty box to get to the pass after timing his run to avoid the offside flag, Hoilett let the ball bounce and then coolly chipped Costa Rican goalkeeper Esteban Alvarado for his 14th goal for Canada before the two collided. The 31-year-old Hoilett, who is looking for a new club following the expiration of his deal with Cardiff City, has four goals and four assists in his last seven Canadian matches.

The 24-year-old Eustaquio, who plays for FC Pacos de Ferreira in Portugal, continued to pull the strings from the Canadian midfield with help from LAFC's Kaye. Eustaquio also threatened from set-piece deliveries.

"Tonight was just one of those really controlling games from Stephen Eustaquio," said Herdman. "And look, I could name eight other guys.

The second goal came after Eustaquio headed the ball towards Hoilett in the Costa Rican penalty box. Hoilett's attempt at a backheel ricocheted off two defenders to Eustaquio, whose shot went through the legs of goalkeeper Esteban Alvarado for his third goal in nine Canadian appearances.

Herdman made four changes to the team that lost 1-0 to the U.S. last Sunday. Eustaquio returned from suspension with Cavallini, Kaye and Jonathan Osorio also slotting in.

This report by The Canadian Press was first published July 25, 2021