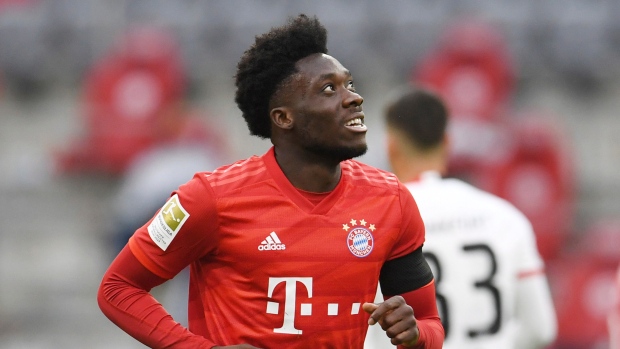 The silverware is starting to pile up for Alphonso Davies.

Days after the Canada international claimed his second straight Bundesliga title with Bayern Munich, Davies was named recipient of the Bundesliga Rookie Award, given to its rookie of the year.

The start of something special: @AlphonsoDavies is the #BLRookie of the Season 🇨🇦🌟🏅🏆🔥💨

The award is given out based on combined fan, media and club voting.

Used as a left-back, Davies has made 37 appearances across all competitions this season for the German champions, including 28 in the league.

During Tuesday's title-clinching game against Werder Bremen, Davies was sent off, but not before being clocked at running 36.51 kilometres per hour, the fastest ever speed timed in the league.

There could still be more trophies in the offing for Davies this season. Bayern meets Bayer Leverkusen on July 4 in the DFB-Pokal Final and the team holds a 3-0 aggregate lead over Chelsea in the Round of 16 of the Champions League set to resume in August.