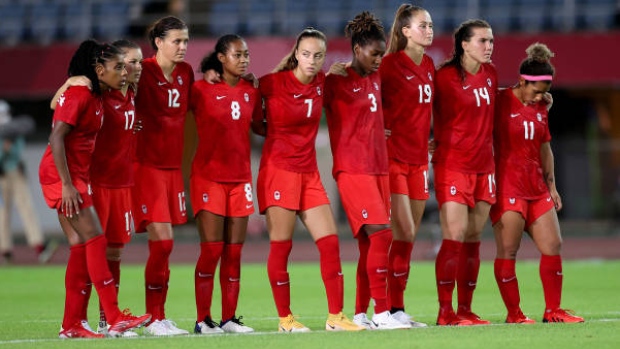 It’s a game Canadian soccer fans have been waiting a long time for.

Nine years after Canada lost a 4-3 heartbreaker in the semifinals against the United States at the 2012 London Olympics despite a dominant hat trick performance from Christine Sinclair, the Canadian women’s national team has an opportunity for redemption on Monday.

Canada and the United States will face off for a spot in the gold medal game at the 2020 Tokyo Olympics and a lot has changed since that infamous match on August 6, 2012 in Manchester.

Canada went on to win bronze over France with Diana Matheson scoring the game-winner in the 92nd minute, securing Canada’s first-ever medal in women’s soccer. Today, Sinclair, Sophie Schmidt, Desiree Scott and Erin McLeod are the only players remaining from that 2012 team.

On the American side that advanced to beat Japan for the gold medal, Becky Sauerbrunn, Megan Rapinoe, Carli Lloyd, Tobin Heath, Alex Morgan and Kelley O’Hara are all in Tokyo.

Since the London Olympics, Canada and the United States have gone head-to-head nine times.

It has been largely one-sided with the Americans recording seven victories and two draws. The first draw came in a friendly on May 8, 2014 with Kadeisha Buchanan scoring for Canada in a 1-1 game. The other came on Nov. 9, 2017 in another friendly as Adriana Leon scored in the 1-1 draw.

The U.S. notably beat Canada twice in CONCACAF Olympic qualifying in 2016 and 2020 and in the CONCACAF Women’s Championship in 2018.

Their most recent match-up came on Feb. 18 at the SheBelieves Cup in Orlando. While it was a tight match where the Canadians had a number of glorious chances to put the game away, Rose Lavelle broke through in the 79th minute for the home side in a 1-0 USA victory.

The United States has continued to lead the way internationally in women’s soccer, winning back-to-back Women’s World Cups in 2015 and 2019 and have remained the No. 1-ranked team in the world since 2015.

Canada’s biggest highlight since 2012 is the bronze medal from the 2016 Olympics in Rio, where they downed host Brazil 2-1 on goals from Deanne Rose and Sinclair.

On January 29, 2020, Sinclair passed American Abby Wambach to become the world’s all-time leader for international goals (men or women). She currently sits at the top with 187.

The last time the Canadians beat the Americans was on March 11, 2001 at the Algarve Cup in Portugal where Canada won 3-0 with a brace from Charmaine Hooper and one from Sinclair.

One of the most promising developments throughout the tournament so far for Canada has been not needing to rely solely on Sinclair to carry them to victory.

While she provided the lone goal in the opener in a 1-1 draw with Japan, it was Janine Beckie who stepped up in a 2-1 victory against Chile with a brace while Leon got Canada on the board in a 1-1 draw against Great Britain.

However, that was no more apparent than in the quarterfinals against Brazil. Locked at 0-0, the game went to penalty kicks. Sinclair was the first player up and her shot was stopped. Tearing her jersey in frustration, it set the table for the rest of the team to deliver.

The United States went 1-1-1 in group play, including a 3-0 loss to Sweden, before beating the Netherlands on penalty kicks in the quarterfinals.

This semifinal represents an opportunity to make Canadian soccer history as they look to improve on their back-to-back bronze medal finishes. The United States, who finished fifth in Rio, has long been Canada’s biggest rival, and an obstacle they’ve had trouble hurdling.

That game at the London Olympics remains burned in the minds of Canadian soccer fans. But Monday represents Canada’s best chance at beating their longstanding rival and pen a better ending to the story they’ve been waiting nine years to write.