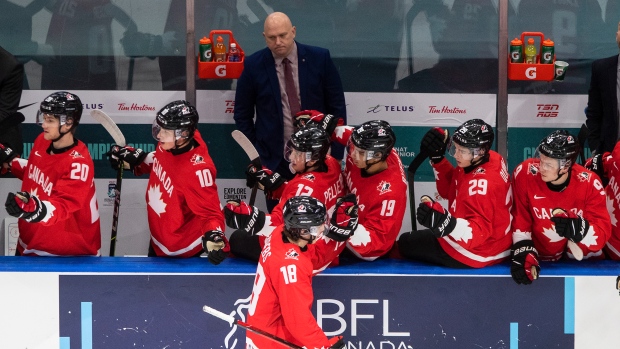 Team Canada looks to prove that their offensive spark was lit beyond fuse a short-staffed Team Germany squad as they take on Slovakia on Day 3 action at the 2021 IIHF World Junior Hockey Championship in Edmonton. Both teams and Finland are tied with three points and look for some separation in the Group 'A' standings. The Finns take on Switzerland to open action on Sunday, while the Czech Republic take on Russia to close out the day.

All of the games can be seen on TSN and streaming on TSN.ca, the TSN App and TSN Direct.

Finland opened their tournament by defeating a short-staffed Germany squad 5-3. They used a balanced attack by getting goals from five different players. Switzerland looks to bounce back after losing a closely contested game against Slovakia 1-0. The Swiss thought they had an equalizer against the Slovaks in the third period. Simon Latkoczy of Slovakia made a dazzling glove save Switzerland's Inaki Baragano's power-play attempt.

Switzerland made it to the quarter-finals last year and is looking to improve on that finish from 2020.

Canada turned on the jets as they fired goal after goal against Germany in their first preliminary tournament game. The 16-2 victory was mostly a reflection of Germany's fatigue, playing with just 16 players on the second of back-to-back days. At the same time, Canada tried to ignore the score and continue to play as if it was even.

An overlooked element of Canada's performance was how well the team played defensively. Despite some offensive weapons that Germany possesses, they were never really a threat beyond the first period. A game against Slovakia should paint a better picture of what Team Canada is all about.

Canada should learn the fate of defenceman Braden Schneider, who was assessed a game misconduct for a check to Germany's Jan-Luca Schumacher's head on Saturday. He could receive supplemental discipline stemming from the infraction.

The Russians look to build off their 5-3 victory over Team USA that saw them chase American goaltender Spencer Knight out of the game in the second period. Much like he performed in their pre-competition match with Canada. Yaroslav Askarov was strong in goal for Russia when the American tried to mount a comeback.

The Czechs will try to put up a better showing than their 7-1 defeat at Team Sweden's hands. The Czech Republic played well to start their game against the Swedes until they found their speed and never looked back. The Russians could prove to be equally challenging. Falling to 0-0-0-2 would be less than ideal for the Czechs.