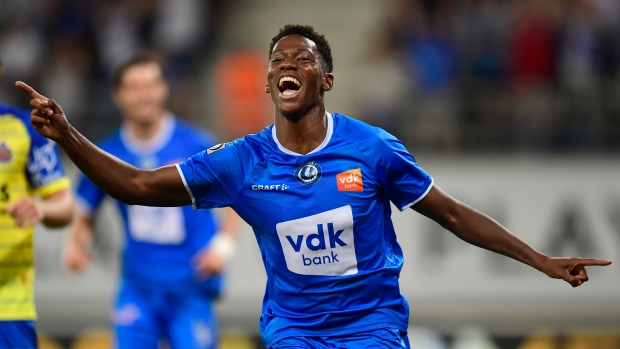 Officially unveiled on Tuesday as a Lille player, Canada forward Jonathan David is excited to prove his worth after his €30 million move, the largest ever transfer for a Canadian player.

Speaking to TSN's Kristian Jack, the 20-year-old David says that the move to Ligue 1 has left him speechless.

"Obviously, it's a great feeling for anybody, really, to feel wanted," David said. "I don't even know what to say. It's just a good feeling to see that your hard work has paid off."

Amid interest from clubs across Europe, David says that Lille's plans for him - specifically to employ him as their new No. 9 - are what drew him to the club.

"When you hear something like that, obviously in your mind, for you there's a little click saying 'Oh, this could be something really interesting,'" David said. "I haven't always played striker. Last year, I mostly played as the No. 10 role behind the two strikers and just a couple of months playing as striker, but that's where I felt like I scored most of my goals. So them telling me that they see me as a striker, for me, I was really happy to hear that. When you hear something like that, they make you want to move there. They make you want to play for that team."

David says that Lille's reputation for molding young talent also factored into his decision. Over the past several years, the likes of Eden Hazard (to Chelsea), Nicolas Pepe (to Arsenal) and, most recently, Victor Osimhen (to Napoli) all graduated from Lille to some of the biggest clubs in Europe.

"I want to go somewhere to get better because they know and I know that this might not be my final step," David said. "But for me, it was a very good choice. Obviously, they have history with selling big strikers, big names to big clubs - people who go on to big careers - and this is the path that I want to follow."

Despite the interest from giants clubs, David insists that nothing has changed about him or as a player.

"For me, nothing's really changed to be honest," David said. "Even though there are some big name clubs calling for me and stuff like that, having interest in me, I don't really get moved by any of it, really. I just try to stay calm and I know that what will happen is going to be good, whatever that may be, but I was just happy in the end."

Next up for David is Lille's first match of the new Ligue 1 season later this month and being ready for it. Because the Belgian Pro League didn't restart the season following the outbreak of the coronavirus (COVID-19) pandemic, David hasn't played in a competitive match since March, but he isn't concerned about his fitness level.

"Obviously, it won't come down to my decision, but I think should be ready," David said. "I'm starting training tomorrow and obviously, with Gent, I'd been training since the restart. I just haven't been playing games, but I [trained] every single day, did every single session. What I have to do right now is prepare the best as I can and be ready for whatever the decision is come game day."