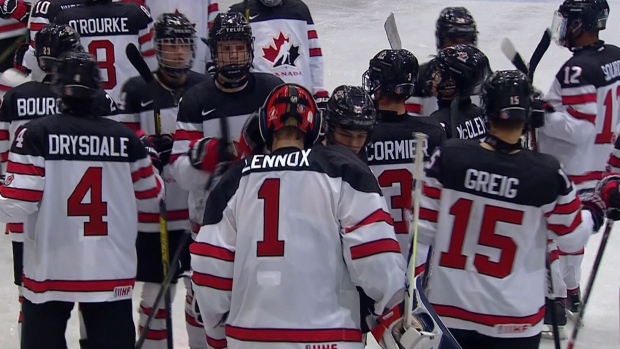 BRECLAV, Czech Republic — Cole Perfetti says Canada's decisive 6-0 win over Finland at the Hlinka Gretzky Cup on Monday shows the what the team is made of.

The 17-year-old centre scored a pair of goals in the opening game of the annual men's under-18 international hockey tournament, being held this year in Breclav, Czech Republic.

"Moving forward, we have a lot of confidence in our group and we will keep building momentum the rest of the tournament," he said.

Seth Jarvis also had two goals for Team Canada, and Will Cuylle and Ridly Greig rounded out the scoring.

"We were expecting a strong opposition from Finland, but we were ready for it and we were able to take the lead early in the game," he said.

Canada will take on Switzerland when preliminary action continues Tuesday morning and Duhamel said the squad will be looking to continue where they left off on Monday.

"Today we had a good performance, but we have to build off that and be better tomorrow," he said. "We have to stay humble, turn the page here and get ready for the Swiss."

Last year, the Canadians defeated Sweden 6-2 to win gold at the tournament.