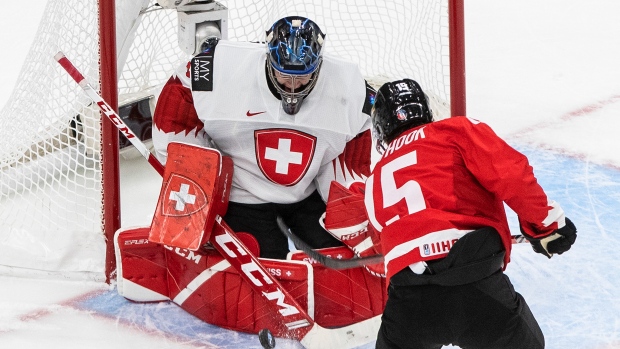 Team Canada practiced inside the Edmonton bubble on Friday.

"If it was [Friday] he would not play, but we'll see [Saturday]," Tourigny said.

The Boston College product left Thursday's game against Finland late in the first period after a shoulder-to-shoulder check by Eemil Viro.

Connor Zary, who started the game as the 13th forward, moved up to take Newhook's spot alongside Cole Perfetti and Peyton Krebs and the Calgary Flames first rounder remained on that line at Friday's practice.

"Z has been really good," Tourigny said. "He had been put in a tough situation. When you're not playing a regular shift it's tough to stay in the game and every time I put him out there he did a really good job [Thursday] and the game before so he earned it."

It's been an emotional couple of days for Zary who signed an entry-level contract with the Flames only hours before puck drop on Thursday. That piece of unfinished business had been on his mind during the World Juniors.

"Honestly, that gives you a little bit of a second wind," the Kamloops Blazers centre said, "a little bit of adrenaline knowing that's over with and that can be out of your head."

Zary, who picked up an assist in the 4-1 win over Finland, credits Blazers co-owner Shane Doan for helping him be ready for this promotion.

"I was on the phone with Shane Doan the other night and he said he's been through this a lot of times and on different occasions with Team Canada. He said, 'No matter what you do, you got to keep telling yourself you're going to be ready. You got to write things down and remember those things and those little things are the things you're going to do when the opportunity arises. That is something I took to heart ... and when that chance did happen I was ready for it."

Zary's teammate and close friend Daylan Kuefler lived with Doan for a year, which is how he got to know the retired NHLer, who represented Canada at the 2004 World Cup, 2006 Olympics and several World Championships.

One day after watching his team throttle the Finns, Tourigny identified at least one area that can be improved.

"The big thing is the box out in our zone," the coach observed. "We were not hard in our box outs so in the third period they had a few deflections and rebound situations. They [did] not get the right bounce, but it could've been dangerous."

Tourigny warned against complacency as Canada prepares to play the Czech Republic, who finished fourth in Group B and got blown out by the Swedes (7-1) and Americans (7-0).

"People don't give enough credit to the Czechs," Tourigny insisted. "They're a really good five-on-five team so we need to make sure we are humble and go into that game knowing it will be a tough match."

The coach pointed out that most of the Czech line-up has a positive plus-minus rating despite some of the lopsided scores. And the Czechs already pulled off one big upset in this tournament by shutting out Russia 2-0.

"The Czechs did us a favour by beating the Russians," Tourigny said. "They showed us how good they can be. There's no way we'll take them lightly."

Although Canada has looked really good so far in outscoring opponents 33-4 in the preliminary round, the pressure of an elimination situation is going to be a new sensation for this group.

"You play Finland and you want to win, but it's not do or die," Tourigny said. "Now, we need to get down to business and make sure we're focused on the task, urgent with the task and patient with the outcome and not focusing on stuff we cannot control."

If Canada gets its forecheck game going against the Czechs on Saturday then they should be in great shape. All four of Canada's lines were coming in waves at the Finns.

"They're getting in really quick," observed defenceman Thomas Harley. “They're not giving them a chance to set up or turn around and even look. They are forcing rims and finishing their hits, which makes it a whole lot easier in the third period because those D don't want to go back and get pucks any more."

"We came out and played our best game so far," said Canada's leading scorer Dylan Cozens. "Reloading on pucks is our biggest thing. They'd move it up the wall and we'd have our high guy reload and create turnovers and then we'd go back at them and get good changes in the offensive zone and get fresh legs out and just keep dominating them by cycling the puck."

Tourigny described Team Canada's forecheck as "beautiful" and praised his players for keeping their shifts short so they could maintain the pressure most of the night.

"When you have that depth you have to exploit that depth," Tourigny said. "You have to play with a pace where you push the game."

The coach noted that when you're playing at that level it can only be sustained for 30-40 seconds and not 40-50 seconds.

"The energy was phenomenal," Tourigny noted.

Jan Mysak lets out a laugh when asked what he thinks about Team Canada.

"They're pretty good," the Czech captain said. "It's going to be a tough game. I know that. Every player on that team is really good. We have to be a very tough team. We want to beat them. We'll see. Nothing is impossible."

Mysak, a forward who played for Hamilton in the Ontario Hockey League last season, said the Czechs will look to replicate their performance against Russia.

"We played as a team," he noted. "We played hard. We played together. We blocked a lot of shots and our goalie [Lukas Parik] had a good game so that's going to be key points."

Mysak scored two goals and added an assist in the four preliminary round games. What's it look like when he's at his best?

With the OHL still on pause, Mysak is playing in the top Czech league for his hometown team Litvinov and has received advice on how to be a good leader from general manager and coach Jiri Slegr.

The Canadiens second round pick in October's draft has also been texting with Tomas Plekanec throughout the tournament. The best advice from the long-time Hab?

"When I asked him how he made the NHL, he told me he did everything they told him."

If you attend a Team Canada practice, you're going to notice Jakob Pelletier. The Val d'Or Foreurs winger is, of course, a talented player, but he is also a loud one. Pelletier will often be heard yelling out something after nice plays or even just at the start of a drill. It sounds like, "Yi! Yi! Yi!"

"I'm kind of like the guy who wakes up in the morning and is on," Pelletier explained. "I kind of love to scream and to talk and, not disturb people, but to be a morning sunshine."

Pelletier said the yell is something he thought up during the selection camp in Red Deer, Alta.

"He's an amazing guy," said Krebs. "He brings a lot of energy to the group. I think every time I talk to the guy I laugh a little bit just because he's got good jokes. He's a beauty and he's a big part of our team and a lot of guys look up to him."

Pelletier is an emotional guy on the ice and after banking a puck in off Dylan Holloway on Thursday night he kissed the Oilers first rounder on the helmet while on the bench.

"I'm a touch-able guy," Pelletier said with a laugh. "I like to hug people and be close to them and it was kind of in the moment. A lot of joy."

Canada had to work hard for this one! Dylan Holloway is credited with the goal 👀 pic.twitter.com/51dsEeSXPX

Bowen Byram has incredible offensive instincts and the ability to make jaw-dropping plays. And while the Vancouver Giants defenceman does have three assists so far at the World Juniors, it has been the well-rounded nature of his game that's been most notable.

"I don't need to be wowing anybody or anything like that," he said of his performance. "I just got to play solid at both ends of the rink and contribute offensively when I can. I feel like I'm doing that."

The Colorado Avalanche prospect, who posted 52 points in 50 Western Hockey League outings last season, seems to control the game whenever he's on the ice and that's why Tourigny is playing him more than anyone else. Byram leads the team in ice time (21:06 per game) and is tied with partner Jamie Drysdale for the tournament lead with a plus-13 rating.

"I want to make the NHL this year and I think that's how you do it," he said. "So, just trying to make sure I have good habits, being underneath the puck, making a good first pass, moving the puck quickly and trying to play a detailed two-way game."