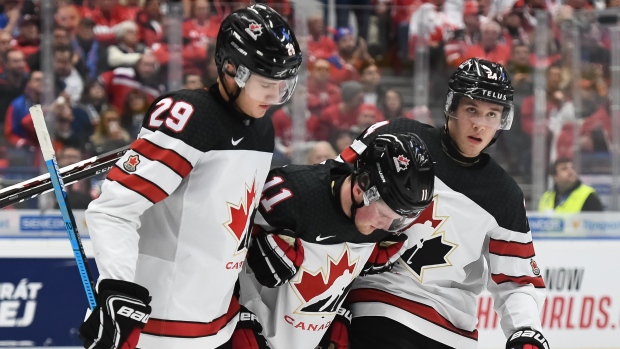 With the Canadians trailing 3-0, the 18 year old from Saint-Eustache, Que., bumped into Russia goalie Amir Miftakhov after being knocked slightly off balance by defenceman Yegor Zamula — his left knee twisting awkwardly underneath him as he fell to the ice.

As Lafreniere lay on the ice grimacing in pain, while surrounded by teammates and Canada's trainer, Ostravar Arena was dead silent.

A potential No. 1 pick in next summer's 2020 NHL draft, Lafreniere didn't put any weight on his left leg as he was helped off the ice by teammates. He went straight to the locker room and did not return.

"We don't know yet," Canadian head coach Dale Hunter said when asked about the extent of the injury. "He's being evaluated."

Doctors continue to review Alexis Lafreniere’s MRI. Sounds like the injury may not be as bad as initially feared, there is in fact hope that Lafreniere may be able to return to play in these #WorldJuniors.

While things looked grim on the ice, there could be a glimmer of hope. According to TSN Senior Hockey Writer Frank Seravalli, doctors continue to review Lafreniere's MRI. "Sounds like the injury may not be as bad as initially feared, there is in fact hope Lafreniere may be able to return to play in these World Juniors," Seravalli tweeted.

The Quebec native has 23 goals and 70 points in 32 games with QMJHL’s Rimouski Oceanic this season.

He also scored a team-high four points during Canada's opening 6-4 victory over the Americans on Boxing Day at this year's world juniors.

"On and off the ice, he's a leader," said Canadian forward Ty Dellandrea. "We all know what kind of player he is."

This report by The Canadian Press was first published Dec. 28, 2019.