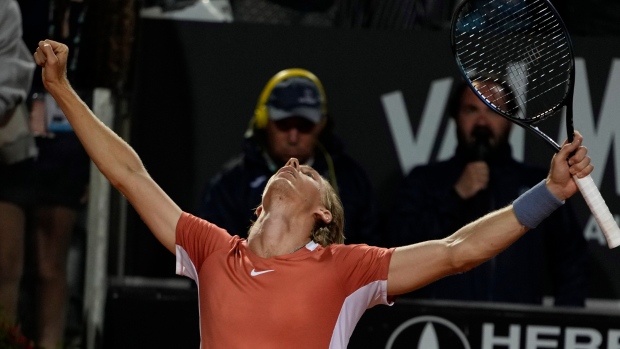 Shapovalov joined fellow Canadians Bianca Andreescu and Felix Auger-Aliassime in the quarterfinals with 1-6, 7-5, 6-2 upset of Nadal to end Thursday's play at the ATP and WTA 1000-series event.

Nadal has been struggling with a foot injury, and limped between points as the match wore on.

“Definitely tough to see him in pain there at the end," said Shapovalov said. "I never want to see that, especially with a great legend like Rafa. … He brings so much to our sport. Hopefully he’s fit and ready to go for the French (Open)."

Shapovalov rebounded strong to start the second set, eventually taking a 4-1 lead. But Nadal battled back and survived a break point chance to hold and tie the set 4-4.

But Shapovalov held serve the rest of the set and broke Nadal in the deciding 12th game to force a decider.

After the players traded breaks to open the third set, Shapovalov took over, winning the match with his third break of the set.

Shapovalov finished the match with 13 aces to Nadal's two and also excelled at the net. The Canadian won 74 per cent of net points (14 of 19) compared to 50 per cent for Nadal (three of six).

“I hurt my foot again with a lot of pain,” Nadal said. “I’m a player living with an injury. It’s nothing new. It’s something that is there, unfortunately. Day by day is difficult. Lots of days I can’t practise with it the proper way again.”

Nadal, the third seed in Rome, entered the tournament with a 466-44 career record on clay.

Shapovalov will face fifth-seeded Casper Ruud of Norway in Friday's quarterfinals. He is now 2-4 lifetime against Nadal, with the other victory coming in the first meeting between the players at the 2017 Rogers Cup in Toronto.

Earlier, Andreescu broke Martić three times on four chances and saved six of the seven break points she faced to reach her first quarterfinal at a 1000 series clay tournament.

Next up for Andreescu is top-seeded Iga Swiatek, the defending champion in Rome who is attempting to win her fifth consecutive tournament.

Auger-Aliassime fired 11 aces and won 84 per cent of first serve points and 79 per cent of net points in a comfortable win over lucky loser Giron.

The eighth seed from Montreal will face world No. 1 Novak Djokovic in the quarterfinals. Djokovic beat Switzerland's Stan Wawrinka 6-2, 6-2 on Thursday.