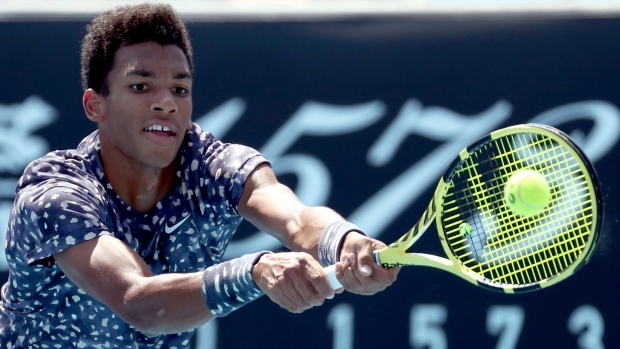 Canada's Felix Auger-Aliassime returned to the top 20 in the world rankings Monday after reaching the final of the ABN AMRO World Tennis Tournament.

The 19-year-old from Montreal, who dropped a 6-2, 6-4 decision to Gael Monfils of France in Sunday's final, rose three positions to No. 18 in this week's ATP Tour rankings list.

Denis Shapovalov of Richmond Hill, Ont., who lost his first-round match to Bulgaria's Grigor Dimitrov last week in Rotterdam, rose one spot to No. 15. The Canadian reached a career-high No. 13 last month.

Monfils, who won the ATP Tour 500 indoor hardcourt event for the second straight year, remained at No. 9 in an unchanged top 10. Novak Djokovic owns the No. 1 position ahead of Spain's Rafael Nadal and Switzerland's Roger Federer.

Milos Raonic of Thornhill, Ont., fell five spots to No. 37 and Vancouver's Vasek Pospisil jumped six positions to No. 98.

In the WTA Tour rankings, Bianca Andreescu of Mississauga, Ont., rose one position to No. 5. Switzerland's Belinda Bencic moved up one spot to No. 4 while the top three, with Australia's Ash Barty at No. 1, was unchanged.

Andreescu hasn't played a competitive match since injuring her left knee at the WTA Finals in October.

She's entered in the Feb. 23-29 Qatar Total Open, but it's unclear whether she'll be ready to play. Andreescu pulled out of this week's tournament in Dubai because of the knee injury.

The Canadian No. 2, 17-year-old Leylah Annie Fernandez of Laval, Que., dropped three positions to No. 189 this week.