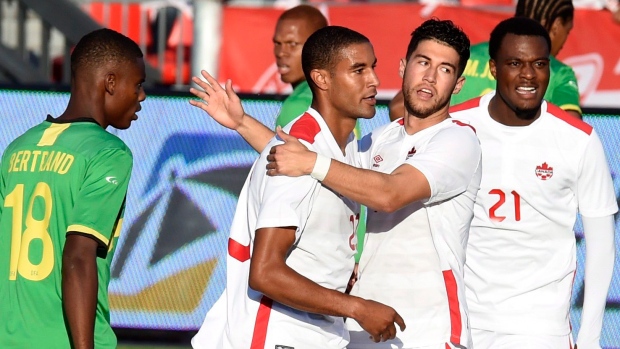 In the wake of Canada's recent men's World Cup qualifying matches – a 1-0 win at home against Honduras, followed by a 0-0 draw away to El Salvador – I've been mulling over the state of the game in Canada with colleagues from across the country. One question, in particular, keeps cropping up: Why have we never been able to produce creative players and goal scorers in Canada?

Our national teams, both male and female, have always been filled with players who are strong, fit, hard-working and disciplined. They work their socks off for their country because, more often than not, they have to. They simply do not possess the same level of talent as many of their opponents. Canada has never been able to field a team with even a handful of players who have genuine match-winning ability – players who can control the tempo of a game and produce a moment of magic to turn a loss into a draw or a draw into a victory – let alone an entire team of such individuals.

Many will point to Christine Sinclair as a counterargument, but she is the very definition of an outlier – a once-in-a-lifetime talent. There is no one in either the men's or women's talent pool who can even come close to matching her abilities.

The reason for this is that we have always left the job of developing young players to the youth soccer clubs that are scattered from coast to coast. By and large, these organizations have done a reasonable job of offering recreational soccer programs to a large number of participants. At the same time, these same organizations have collectively struggled to identify, nurture and develop players of genuine talent.

It’s hard to blame them entirely, though. There has never been a national plan for how we develop players in Canada; no document, no curriculum and no guide for coaches or parents to reference. In fact, we are one of the only countries in the world that does not have an assessment-based coaching qualification for coaches who are working with youth players.

Can you believe that? It’s like asking a bunch of volunteers to run our education system, and then scratching our heads in dismay when the kids who graduate have never learned how to read or write.

By their early teen years, Canadian youth players have had lengthy exposure to a broken development system – one that caters more to the needs of adults, rather than to the needs of the young players it is meant to develop. Is it any wonder, then, that the resulting player pool is largely deficient in the skill sets required to achieve success at the international level?

If you examine how youth soccer is structured in Canada, the answer to why we struggle to produce players is clear.

Those who are deemed to have talent are placed in rep soccer, while those who are deemed to be beginners are placed in house league. The majority of resources that a club or academy possesses – coaching knowledge, facility availability and equipment – are then directed almost exclusively towards their rep program, while children in the house league program are left to basically fend for themselves.

Most clubs have such a shortfall of coaches that they have to beg parents to coach a house league team. Without these selfless volunteer parent-coaches, a large percentage of young players in our country would be unable to play organized soccer. These parent-coaches deserve nothing but respect and admiration.

Many of them are given very little support, training or guidance as to how to teach soccer to the players they've been tasked with overseeing. Yet they still show up – every day of the week, in some cases – so that their kids and others can play the game.

Unfortunately, the limits of our coaching capacity are having an adverse effect on our ability to develop players in Canada. We have far too many players given the number of trained and experienced coaches we have. The result is a huge variance in the experience that our young players have with the game.

Some children are fortunate – they get placed with a coach who might be lacking in soccer knowledge, but who has experience coaching other sports or who works with children (i.e. an elementary school teacher). These coaches understand that ensuring that the kids have fun playing soccer is the priority, not the outcome of their games.

Other children are not so lucky. They get placed with a coach who not only lacks soccer knowledge, but is also uncomfortable working with large groups of children or who sees this coaching role as an opportunity to re-live their failed athletic career.

If a child's first experience with the game is a negative one – which can sometimes be the case when they are placed with a coach who puts his or her ambitions ahead of the needs of the players – there is a very good chance that child will quit the game. If a coach cannot teach the skills a child needs to play the game (and do so in a way that engages the child) that child won't have any fun playing soccer and they will quit the game.

I can't say that I blame them. If I wasn't having fun playing a sport, I'd probably want to quit, too. Sadly, this isn’t the worst of our problems. We can always educate parent-coaches, and we should embrace them by giving them the tools they need to succeed in their roles. Many of our provincial associations have done an excellent job of doing this, as the culture of coach education starts to take hold.

Our biggest problems lie in the world of rep soccer.

Talented young players are courted and recruited from the time they take their very first steps in competitive soccer. If a young player demonstrates advanced ability for his or her age, you can be sure that every coach that crosses that child's path will know about it in advance. Teams as young as nine or 10 are scouted, and tactical game plans are devised (most of which have very little to do with teaching children the skills needed to play the game) in order to nullify the strengths and expose the weaknesses of the opposition.

It is all done in the pursuit of winning a championship.

When a season comes to its conclusion, many coaches use the off-season to upgrade their players – they discard the weaker players on their team and recruit stronger ones from other clubs. Teaching weaker players the skills they need to succeed in the game (or even looking within their own club's house league program for late developers) is a foreign concept to these coaches, who instead prefer the quick fix. It is far easier to make empty promises to parents than it is to help a child improve their first touch or dribbling ability.

These coaches are often very good at selling a dream – in part, because the unsuspecting parents who are doing the buying have no idea what they are actually signing up for. They are told that winning a showcase tournament, or winning the provincial championship or going all the way to club nationals will unlock the door to untold opportunities for their child. University scholarships, tryouts at professional club academies and even national youth team call-ups are just some of the carrots that are dangled by these coaches to entice parents to sign up.

At no point during this song and dance are the parents ever told the truth - that winning championships and trophies doesn’t matter.

Ask any university coach, professional club academy coach or national youth team coach to list the 10 most important factors they look for when they are trying to identify prospective players, and I guarantee you that not one of them will put trophies won on their list.

So why, then, has the entire youth development system in Canada been based for decades on the premise of crowning a championship winner in every age group at the end of every season? Are we really so blind that we cannot see that all of our struggles in soccer in Canada – our failure to compete in a meaningful way at the international level and our failure to produce a reliable stream of top quality players and coaches – begin and end at the grassroots level?

I had a coach educator once who summarized the grassroots game for me in this way (which I thought was brilliant): “Soccer is a team game played by individuals. If you fail to develop the individual, what you do with the team will be irrelevant.”

His point was very simple. As a youth coach, your job is to teach your players the skills they need to play the game. If you fail to teach them these skills – to pass, receive, dribble, shoot, create space – in order to chase short-term success, there are no tactics or strategies that you can employ that will help them fulfill their potential over the long-term. They will eventually fall out of love with soccer, and you will have failed them.

The development system for youth soccer in Canada – dividing young players into teams based on ability, competing for championships on a yearly basis, promoting teams that win and relegating teams that lose – puts an overwhelming focus on the concept of team success, almost always at the expense of individual learning.

The system encourages coaches to ignore their obligation to teach their players the game and allows them to simply recruit other players – usually those who are physically mature for their age – so that they can win year after year.

Fix the system, and we will solve the problem.

The Swedish Football Association last week made the decision to no longer have winners declared for competitions involving teams up to 12 years of age, mirroring a similar decision made by Canada Soccer, who removed scores and standings for players under the age of 12 when it introduced its long-term player development plan (LTPD). I have written about the reasons for taking this approach before, so perhaps I can frame it a different way this time in the hopes that more people will understand the rationale.

Keeping scores and standings in youth soccer has led to the relentless pursuit of meaningless trophies – by adults, not children. Kids just want to play and have fun. They want to win, but that isn’t their primary focus. Sadly, the same cannot be said for many adults.

The championship pursuit brings out the worst behaviour in some adults, including both coaches and parents. This behaviour then compromises the learning environment for all Canadian youth players, because it devolves our game to the point where adults have placed short-term gain (winning a game, tournament or league title) ahead of the long-term learning needs of our young players.

This is why we fail to produce a reliable stream of talented players in Canada. Not because we don't have the raw materials – soccer is, and has been for some time, the most popular participation sport in Canada – but rather, because we have stopped being teachers of the game.