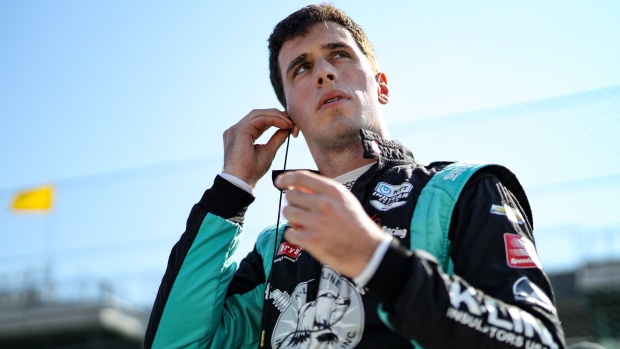 The first few races of Dalton Kellett's IndyCar career were done on an elaborate iRacing rig in his home office in Indianapolis because of COVID-19 restrictions.

He's pleased his second season will be different.

Although Kellett eventually got to drive an actual car in IndyCar races last year, he's excited for a proper start to the season on Sunday at the Honda Indy Grand Prix of Alabama in Birmingham at Barber Motorsports Park.

The driver from Stouffville, Ont., said that the rhythm of the 2020 season was off and he's glad he'll have a more typical start to his sophomore season.

"They've just announced that they've sold out the ticket allotment for the first race, so that's great news," said Kellett. "I'm just looking forward to being back at a race weekend with semblance of normalcy with fans in the stands."

Although fans will be watching the race live, there will still be protocols in place to maintain social distance and keeping the drivers and pit crews in bubbles.

Kellett said having fans at a track like Barber, even at a distance, can make all the difference.

"The grass berms where the fans sit on, it's a really beautiful facility and they've done a great job building a sort of amphitheatre feel for some of the corners," said Kellett. "Lots of people come with chairs and umbrellas and camp out.

"You can definitely notice when that's empty. When you go there for race weekend and it's busy it really changes how the track looks."

Barber's 3.83-kilometre permanent road course has 17 flowing turns and features 80 feet of elevation change to challenge both drivers and engineers.

Kellett was originally signed to A.J. Foyt Racing to specialize in road courses. He said that 2021's more stable schedule has made it easier for him to prepare for the IndyCar season compared to last year's uncertainty, with races being moved or cancelled with as little as a week's notice.

"Having a set date that you can really work toward it just helps you be more prepared and more organized as far as your testing and training program," said Kellett. "It's been a normal off-season, which has been nice."