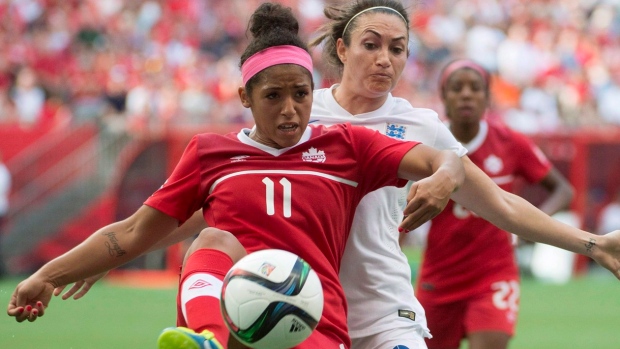 The 32-year-old from Winnipeg is the team's anchor, living up to her nickname Destroyer as holding midfielder. Crunching tackles are her calling card. Scott looks to win the ball back and trigger Canadian attacks.

"That feels like home," said Scott. "Continuing to be the Destroyer, but then help us be a little more dangerous in the attack is my process now."

Credit former coach John Herdman for coming up with the nickname during the 2012 Olympic qualifiers.

“He did an interview after and he said ‘How about that Desi Scott?’" Scott recalled. "He just said "She's destroying them out there.' And it just sort of stuck from there."

On Sunday, Scott earned cap No. 150 and served as captain — with Christine Sinclair was given the day off — as eighth-ranked Canada dispatched No. 51 Jamaica 9-0. This month also marks 10 years on the national team for Scott.

"That's pretty wild to see I'm still kicking that old soccer ball around ... It's pretty cool to be able to still be here and keeping up with the young guns," she said with a smile. "Well trying to anyways. It's just an honour to be doing this."

The Canadian women meet No. 26 Mexico on Tuesday to decide the Group B winner. Both teams have already advanced to the tournament semifinals.

The goals is to win the pool and avoid the Group A winner, likely the top-ranked Americans, in the semifinals. The U.S. faces No. 37 Costa Rica on Monday to decide their group.

The semifinal winners book their tickets to the Tokyo Olympic later this summer.

Scott's role on the field is to disrupt the opposition. Scoring goals isn't her brief but she came close to her first for Canada a couple of times coming off the bench against St. Kitts in a midweek 11-0 rout.

Scott was 22 when she made her debut for Canada in February 2010 in a 2-1 win over Switzerland at the Cyprus Cup. Sinclair scored that day, proving some things never change.

"I think I just remember a lot of nerves," Scott said of that game, recalling being a little intimidated in the presence of veteran teammates like Wilkinson, Matheson and Sinclair.

Scott still feels the nerves a bit before games but says the team is her family these days.

"It feels like home on and off the pitch," she said.

A group chat helps that connection when the players are spread around the globe with their clubs.

Scott is going into her third season in Utah, where the Royals play at Rio Tinto Stadium.

"The soccer environment is absolutely incredible," she said. "I think our owner (Dell Loy Hansen) is wanting to just raise the women's game, not only for our club but for the entire (NWSL) league, which is incredible to have that kind of support behind you.

"We've got a brand new locker-room made just for us. They want us to feel how like how the MLS men's (Real Salt Lake) team feels. So we're playing at their stadium. It's truly professional and you feel like a professional playing there."

"I've been forced to become a little more outdoorsy these days," she said. "Taking in the hikes, the scenery. It's not usually my scene but I've come to love the outdoors a bit more. A lot of good coffee shops. It's got character for sure."

The fan support is also impressive, with crowds of around 10,000 supporting the Royals.

Her club resume also includes the Vancouver Whitecaps, FC Kansas City and England's Notts County. She landed in Utah after the Kansas City franchise folded, a sad day for Scott who loved the city.

"It's like a bigger Winnipeg with better BBQ," she said fondly.

In England, she had a bucket list moment when she played in an FA Cup final before 30,000 at Wembley for Notts County.

Returning to Texas for the Olympic qualifier brings back memories, not all good for Scott.

In September 2018, Scott was injured on the first day of training camp in Texas ahead of the CONCACAF qualifying tournament for the 2019 World Cup. Her foot was stepped on during a tackle, resulting in a small bone fragment coming loose in her big toe.

She spent the next two months in a walking boot.

"Toe's fully healed," she said. "At a different place now. Coming back to this hotel, it was a little bit weird. I stayed on (in 2018) in a leadership role, so I stayed here throughout tournament.

A different place includes putting some distance from the disappointing round-of-16 exit at last summer's World Cup in France after a 1-0 loss to Sweden.

"For me personally it took a long time, well into the fall, to get over it," she said. "I don't know if I'm fully over it yet. I think the leadup to the World Cup, we truly had such a belief that we could go and win the entire thing. The early exit was pretty shocking."

"A pretty sour taste," she added. "But then having that time to reflect and now with a potential Olympics around the corner, I think it's fuel to the fire because I know that was an early exit for us and we have way more to show and to prove."

Scott, a former University of Manitoba player who is a certified Zumba instructor away from the pitch, sees 2020 as "a fresh start."