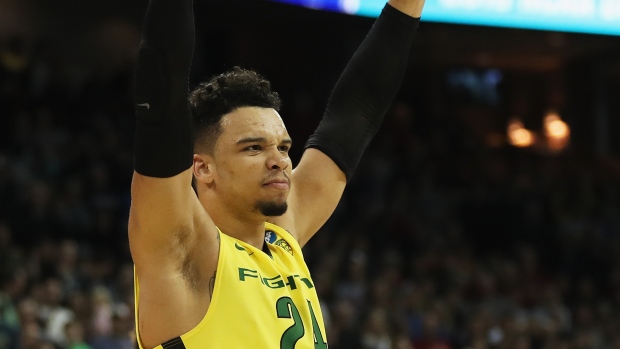 EUGENE, Ore. — Canada's Dillon Brooks has earned Pac-12 player of the year award after leading the Oregon Ducks to the top spot in the conference.

The Mississauga, Ont., native led the Ducks with an average of 16.0 points per game in the regualr season, and was the lone Oregon player to make the all-conference first team.

He returned from a foot injury in time to help the Ducks rebound from a 2-2 start. They went 25-2 after Brooks' season debut versus Georgetown, including an undefeated record at home that extended their NCAA-best active home win streak to 42 games.

Brooks shone in big games, hitting game-winning three-pointers Dec. 28 against UCLA, and at California on Feb. 22. He also scored the Ducks' final 12 points in a one-point victory over Arizona State on Feb. 4.

Teammate Chris Boucher of Montreal was a second-team honourable mention and was named to the conference all-defensive team.

The conference co-champion Ducks are the No. 1 seed in the Pac-12 tournament

The Ducks and Arizona shared the Pac-12 regular-season crown. Oregon opens the Pac-12 tournament as the No. 1 seed on Thursday in Las Vegas.