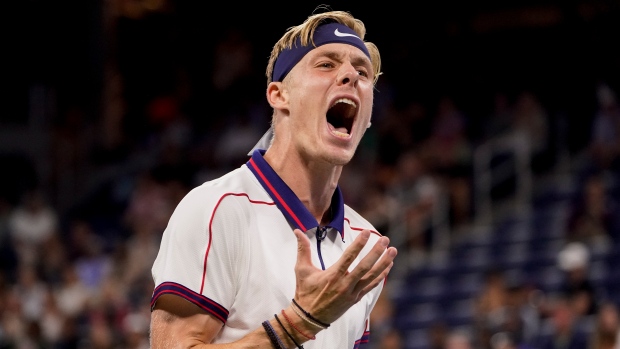 MONTREAL — Canada will be without its two biggest names at the Davis Cup Finals later this month.

Felix Auger-Aliassime and Denis Shapovalov have both pulled out of the international tournament, Tennis Canada said in a statement Sunday.

Auger-Aliassime, 21, said he's been dealing with an injury for "quite some time now," adding that his doctor has recommended rest.

Shapovalov, 22, also cited rest in his decision to withdraw.

The competition is set to take place Nov. 25 from Dec. 5. Canada opens against Sweden in Madrid before taking on Kazakhstan.

The pair will be replaced by Toronto's Steven Diez on a squad that also includes Vancouver's Vasek Pospisil, Brayden Schnur of Pickering, Ont., and Peter Polansky of Thornhill, Ont.

Montreal's Auger-Aliassime, ranked 12th in the world, Shapovalov of Richmond Hill, Ont., ranked 18th, and Pospisil were part of the Canadian team that advanced to the final tie of the 2019 tournament before losing to host Spain.

"It is always with great pride that I represent my country and therefore it is not a decision that I have taken lightly," Auger-Aliassime said in Tennis Canada's press release. "The team has all of my support and I wish them the best."

Shapovalov lost Saturday's final of the ATP 250 event in Stockholm to Tommy Paul of the United States.

"It's always a pleasure and an honour for me to represent my country," he said. "But I need some rest in the off-season."

Auger-Aliassime as represented Canada at the Davis Cup four times. His successful 2021 season saw him reach the semifinals of the U.S. Open and rise to a career-high 11th in the ATP Tour rankings.

Shapovalov, meanwhile, has played in eighth Davis Cup events. On top of Saturday's final in Sweden, he reached the Geneva Open final and the Wimbledon semis in 2021.

Diez, 30, will make his second Davis Cup appearance for Canada, and first since 2010. He's currently ranked 259th in the ATP rankings.

"We know that Felix and Denis have always made the Davis Cup one of their top priorities," Canadian captain Frank Dancevic said. ""But it's been a long and even more trying season due to the protocols and measures put in place to help combat the spread of the COVID-19 virus, and we completely understand their decision.

"We know that we can count on Felix and Denis' support and leadership in the years to come."

This report by The Canadian Press was first published Nov. 14, 2021.