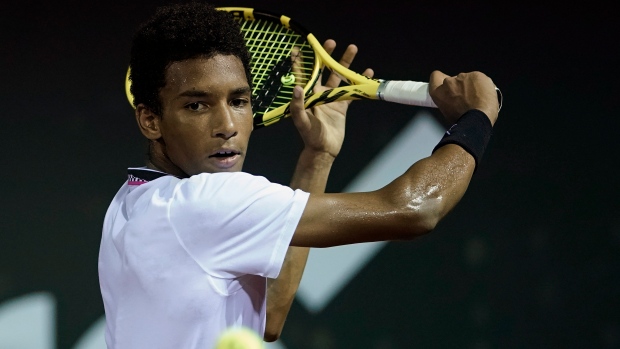 MADRID — Overcoming lack of practice because of a stomach virus, Rafael Nadal cruised to a 6-3, 6-3 win over Canadian teenager Felix Auger-Aliassime at the Madrid Open on Wednesday.

Nadal lost only four points on his serve in the first set and broke Auger-Aliassime three times in the second to reach the third round in the Spanish capital.

The second-ranked Nadal had his practice time reduced after falling ill just before the tournament.

"I've had this stomach virus for a few days so this was a very important match for me," Nadal said. "I've been improving but obviously the body remains a bit debilitated for a while. I'm very happy with the victory. It was very important."

Nadal is trying to rebound from consecutive eliminations in the semifinals of both Monte Carlo and Barcelona, which marked his worst start to the clay-court season in four years.

A five-time champion in Madrid, the Spaniard will next face American Frances Tiafoe, who defeated Philipp Kohlschreiber 6-4, 3-6, 6-3.

The 18-year-old Auger-Aliassime, a native of Montreal, is having his breakthrough season on tour, having moved to 30th in the rankings after reaching the final in Rio and the semifinals in Miami.

He converted on his only break opportunity of the match late in the second set, but Nadal broke right back to close out the match at the "Magic Box" centre court. The 17-time Grand Slam champion converted four of his 10 break opportunities, with the last one coming on his sixth-match point of the final game.

Earlier, Juan Martin Del Potro squandered a match point in a 6-3, 2-6, 7-5 loss to Laslo Djere in his second tournament since injuring his knee in October. Del Potro converted only two of his 11 break opportunities, failing to capitalize on the match point at 5-4 in the final set. The Argentine had last played in Delray Beach in February, losing in the quarterfinals.