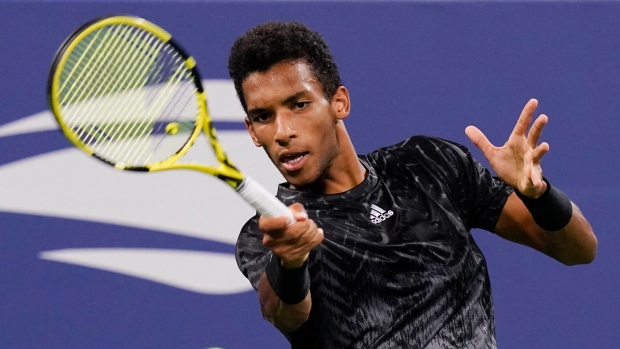 STOCKHOLM — An all-Canadian semifinal matchup was set at the Stockholm Open after Felix Auger-Aliassime and Denis Shapovalov won their respective matches Thursday.

Auger-Aliassime, from Montreal, reached his fifth semifinal of the season with a 6-4, 6-3 win over Botic de Zandschulp. The second-seeded Canadian’s serve was the bedrock of his victory, with Auger-Aliassime hitting 11 aces and winning 27 of 33 first-service points.

“I moved well and I mixed up the ball speeds and heights,” he said. “The court suits me well here.”

Shapovalov has dropped three of five career matches at the ATP Tour level to Auger-Aliassime, his good friend and compatriot.

Also Thursday, Tommy Paul held off Andy Murray's comeback attempt to beat the former No. 1 6-2, 3-6, 6-3 to reach the semifinals.

Paul jumped out to a 4-1 lead in the first set but struggled with his first serve in the second, allowing the two-time Wimbledon champion back in the match.

But Murray double-faulted to hand Paul a 4-3 lead in the deciding set, missing out on a chance to reach his first semifinal since the European Open in October 2019, before undergoing hip surgery.

“He is a legend," Paul said of Murray. “I played some of my best tennis today and I even looked over at my coach mid-match and thought it was fun to battle him today.”

Paul will face fellow American Frances Tiafoe, who became the first player to reach the semis by rallying to beat Dan Evans 1-6, 6-1, 6-1.

That earned the eighth-seeded American a place in the semifinals for the second time in three weeks, having got to the final at the Erste Bank Open in Vienna where he lost to Alexander Zverev.