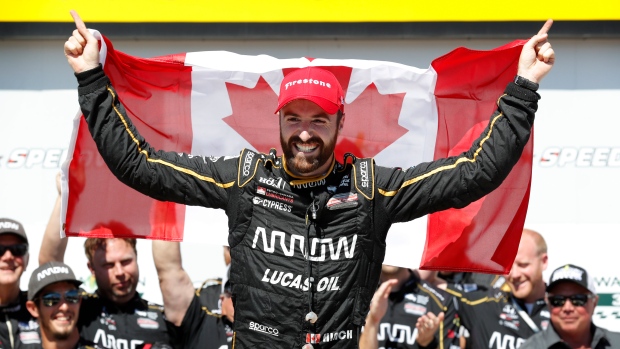 Paul Tracy and James Hinchcliffe won't set an over/under on how many times they'll say "eh" in a broadcast together, but they say Canadian viewers are welcome to try and count.

"I don't really say it anymore, I've been living in the States for so long now," said Toronto's Tracy. "I've kind of lost my 'eh' and my Scarborough hillbilly twang."

"I'll try to slip a few in there just to keep the Canadian pride high," laughed Hinchcliffe, who's from Oakville, Ont.

Hinchcliffe joins Tracy and Australia's Leigh Diffey in NBC's broadcast booth this weekend for the Iowa IndyCar 250s doubleheader on Friday and Saturday night. The races will also be broadcast in Canada on Sportsnet.

"We're taking over, we're going to try and push the Australian of the booth and have it just be us in here," said Tracy.

Hinchcliffe was broadcasting in pit lane for last week's Road America but will be helping call the action from the booth for this weekend's twin races.

Trying his hand at television is part of Hinchliffe's ongoing "bucket list" year that began when he was cut loose by McLaren Arrow McLaren SP in the off-season.

A sponsorship deal with Genesys and a three-race deal with Andretti Motorsport got Hinchcliffe back on the IndyCar schedule. He finished 18th at the Genesys 300 on June 7, then 11th at the GMR Grand Prix on July 4, but he said it's a "cool opportunity" to learn about broadcasting from Tracy, Diffey, and their colleagues at NBC.

"Last weekend down in pit lane, my first crack at it, I had to have a lot of people holding my hand and walking me through with everything but they're all such pros and they got me through it great," said Hinchcliffe. "It's just awesome to still be at the track and keeping track of everything in the events I'm not driving in."

The 33-year-old Hinchcliffe will be back on the track again for the Indianapolis 500, which has been moved from its traditional date on the May long weekend and is now Aug. 23.

Although they first met in 2006, the 51-year-old Tracy remembers hearing about a young 10-year-old Hinchcliffe tearing it up on Ontario's go-karting circuit. Hinchcliffe quipped that he had heard of "the Thrill from West Hill" well before he was 10.

Friendly banter of that nature is a near-constant between the two Canadians, even during an interview.

"James is a natural at this stuff," said Tracy, who's been a colour commentator for IndyCar races since 2014, when asked how Hinchcliffe did in the booth during Friday's practice.

"I've got a good teacher," chimed in Hinchcliffe, chuckling.

"What's so good about it is Paul and I talk about racing all the time, that's what we do, and we've been doing it for years," said Hinchcliffe. "Now we're just doing it with microphones on. It's really just a natural fit for us."