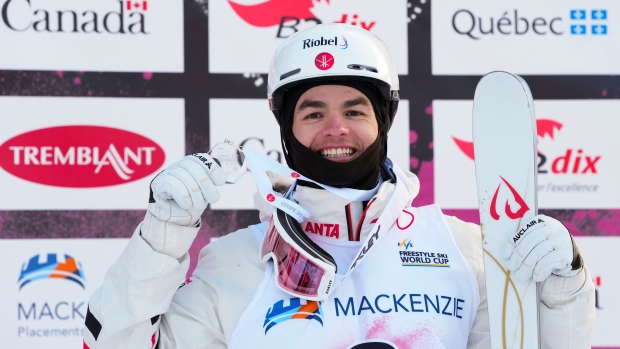 MONT-TREMBLANT, Que. — Canada's Mikael Kingsbury has one thing on his mind now — the number 70.

Kingsbury pumped his fists twice as he crossed the finish line on Friday as he earned 86.24 points on his final run to win moguls gold at a World Cup event in Mont-Tremblant, Que. It was the fourth gold medal of his 2021-22 season and, more importantly, the 69th of his career.

He'll go for his 70th World Cup title on Saturday, again in moguls.

"I'm confident. When you start the weekend like that I know I can do the same tomorrow," said Kingsbury, who added that he's won in Mont-Tremblant three out of a possible four times, with second place being his worst finish.

"I won qualifiers, the final, and the super final today so the goal tomorrow is not only to repeat that, but to put myself in a good position for the last run to put down some good skiing."

"I know, I can ski better than I did today and I got the win," said Kingsbury. "I've got a lot of juice still in the tank.

"I just need a bit of rest tonight. good night's sleep, and I'll be ready for tomorrow. And yeah, why not get 70?"

Japan's Anri Kawamura won gold in women's moguls with a score of 81.76. France's Perrine Laffont (81.43) and Tess Johnson (79.25) of the United States rounded out the podium.

COVID-19 protocols in the province of Quebec prevented fans from being in attendance at the World Cup event.

Kingsbury, who is from Deux-Montagnes, Que., said it was disappointing to compete without spectators but that he appreciated all the effort that went into making the event happen despite surging infection numbers worldwide.

"It would be nicer with the crowd but it's nice that all the volunteers and organizers of the Tremblant World Cup made us a good course. I know it wasn't easy," he said. "It's cool to get the chance to get to 70, even without the fans."

— By John Chidley-Hill in Toronto.