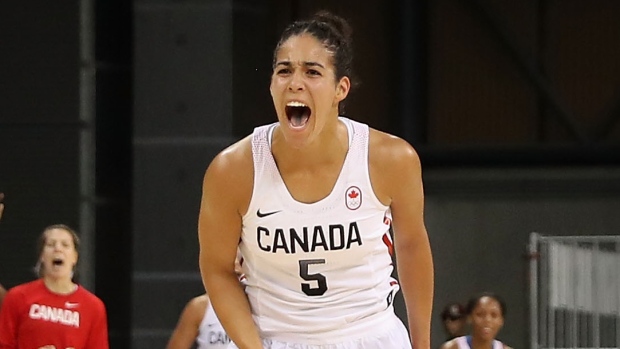 Natalie Achonwa had 24 points and eight rebounds to lead the Canadians to an 80-50 victory over Sweden on Saturday, clinching Canada its third consecutive Olympic berth.

Bridget Carleton added 12 points, while Shaina Pellington chipped in with 11.

Canada, which defeated Belgium 61-56 on Thursday, needed only to finish ahead of Belgium or Sweden in the four-team qualifying tournament to book its third consecutive Olympic berth.

The Canadians, who are ranked an all-time high No. 4 in the world, had a shaky first half against the 22nd-ranked Swedes, giving up 11 turnovers. Sweden opened the second quarter with an 8-0 run for a five-point lead.

But Canada responded and a lay-up by Kayla Alexander, who returned for this tournament after being sidelined for four months with a knee injury, sent Canada into the halftime break with a 37-31 lead.

The Canadians broke the game open with a dominant third quarter and when Miranda Ayim connected on a jump shot with 12 seconds left in the frame, Canada went up 59-41 to start the fourth.

Canada would go up by 32 points in the dying minutes before the final buzzer. The Canadians then gathered at centre court, hoisting a giant "ticket" to Tokyo that read "Qualified."

The basketball women are the eighth Canadian team to qualify for Tokyo, joining the women's soccer, rugby sevens, softball and water polo squads and the men's field hockey, rugby sevens and volleyball teams.

Canada's women's soccer team clinched its berth a day earlier with a 1-0 win over Costa Rica.

Canada's previous high at a non-boycotted Games was five teams — excluding the 1976 Olympics in Montreal when the country sent nine teams as host.

The Canadian men's team needs to win its last-chance tournament in late-June in Victoria, B.C., to book its first Olympic berth since the 2000 Sydney Games.