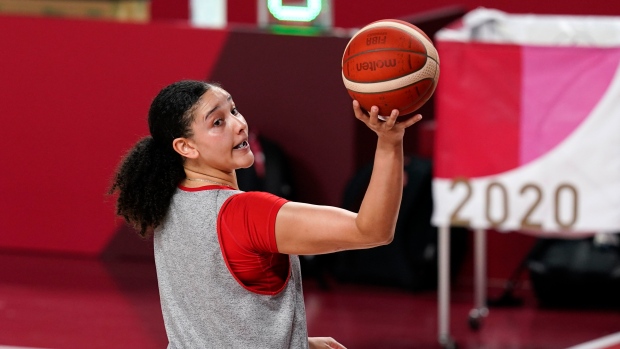 No coach has been listed for the camp, which falls within a FIBA international window. Canada Basketball and longtime head coach Lisa Thomaidis agreed to part ways recently, and no replacement has been announced.

The camp is being held at the Toronto Raptors' practice court in Scotiabank Arena.

"This camp is an important first step to begin our journey towards the Paris 2024 Olympic Games and will be focused not only around on-court development, but also continuing to grow as a program off the court together," Denise Dignard, Canada Basketball's GM of women's high performance, said in a release.

Despite not having a competition during this window, it's a chance for the Canadian women's team, which didn't advance out of the preliminary round at the Tokyo Olympics, to train together.

The camp kicks off an important three years leading into the 2024 Olympics.

Canada will look to qualify for the FIBA Women's World Cup through one of four global FIBA World Cup qualifying tournaments, Feb. 10-13, 2022. The tournaments feature four countries, with the top three from each earning berths in the World Cup, Sept. 22 to Oct. 1, 2022, in Sydney, Australia.

The host cities and draws for the four qualifiers will take place later this month.

Canada remains No. 4 on the FIBA world women's rankings.