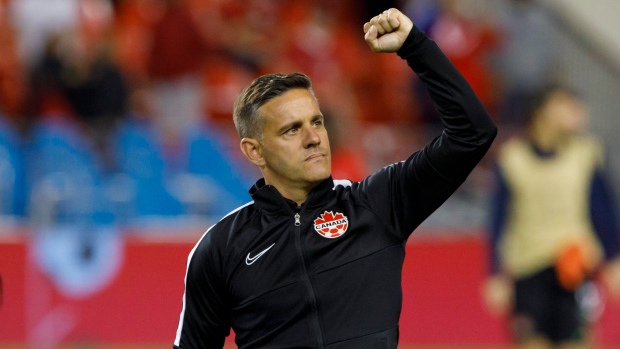 Canada Soccer has called a news conference for Friday in Langford, B.C., with the expectation that is to announce a men's international in March.

Men's coach John Herdman is due to address the media at Westhills Stadium, home of the CPL's Pacific FC.

The Canadian men, currently ranked 73rd in the world and seventh in CONCACAF, are chasing El Salvador (No. 69, sixth in CONCACAF).

The top six CONCACAF teams after the June international window will qualify for the Hex, the most direct route of World Cup qualifying out of the region that covers North and Central America and the Caribbean. The top three finishers in the Hex round qualify for Qatar 2022.

Herdman and Canada Soccer are looking to play as many matches as possible in a bid to close the gap on El Salvador.

Canada started the year with 1,331.2 points in seventh spot in CONCACAF, 15 points behind El Salvador. In January, Canada beat No. 162 Barbados twice and lost to No. 39 Iceland.

The Canadians were 30 points behind El Salvador last July when CONCACAF announced its revised pathway for World Cup qualifying.

Failure to make the Hex means a more convoluted qualifying schedule for teams ranked seventh through 35th in the confederation. The last team standing will meet the fourth-place Hex finisher to determine who represents CONCACAF in an intercontinental playoff for a berth in the World Cup.