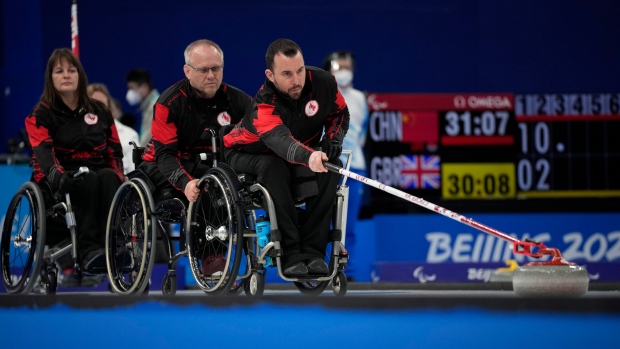 BEIJING — Canada’s wheelchair curlers are in the playoffs of the Beijing Paralympics.

The Canadians advanced to the semifinals with a come-from-behind win over Norway on Thursday, finishing with a 7-3 record and a guaranteed spot in the top four. Skip Mark Ideson was pleased to lock up a playoff berth, even as his team was unsure of who it would play next.

“I’m feeling some relief,” said Canadian skip Mark Ideson. “To get through the round robin and to get our spot in the playoffs — it’s a relief.”

Canada had to wait to learn who its semifinal opponent would be, with the final standings being settled late on Thursday, after the Canadians had returned to the athletes' village.

“We’re definitely going to prioritize rest and recovery,” said Ideson before the standings were finalized. “It’s a long week, with 10 games in a row … a little rest wouldn’t hurt.”

Slovakia was the last playoff entry, joining China, Sweden, and Canada in the semis. The Canadians will play China on Friday.

“I think we thought we should be a playoff team, so it’s great that we officially are,” said Ina Forrest, third for Team Canada. “I think we just go forward playing the same no matter who we play — treating every shot like it matters, and do your best on every single one. We don’t ever quit, so we’re always going to be there.”

Ideson agreed with his teammate that if the Canadians stick to their game plan they will come home with a medal.

"All of the qualified teams will be tough to play against, so it doesn't really matter who we end up playing," he said. "We're just excited to get out there and play.

"We're going to stick to our process, and let the chips fall where they may."

The Canadians were trailing by three with three ends to play in their final round-robin match. Canada scored two, bringing the Norwegians within one.

A hit and roll by Canada’s Jon Thurston forced Norway to one in the seventh, meaning Canada would play the eighth down two, with the hammer.

A perfect end by the Canadians and a costly miss from Norway left Canada sitting three with two rocks to come.

Norwegian skip Jostein Stordahl attempted a freeze, but left enough room that a well-placed Canadian takeout could remove it, and win the game.

Thurston connected on the takeout and Canada scored three and completed the comeback win, 7-6.

“I just stuck to my process. I really wanted to confirm the weight and the path,” said Thurston, who throws fourth stones for Canada. “We talked it out so I was clear on what I was trying to do. I threw it nice and positive, and we got the result we wanted.”

Alexis Guimond of Gatineau, Que., a bronze medallist in the super-G, did not finish nor did Logan Leach of Lumby, B.C., and guide Julien Petit in their respective categories.

This report by The Canadian Press was first published March 10, 2022.