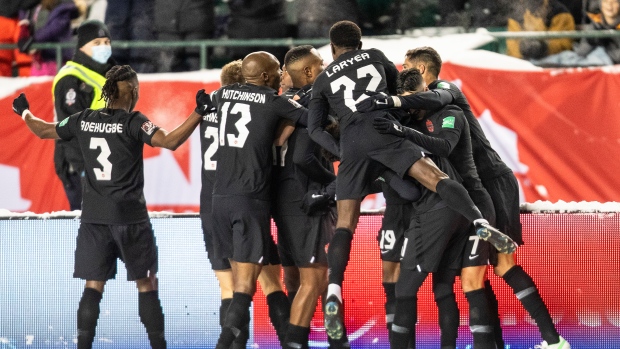 After jumping 32 places to No. 40 in the FIFA rankings over the course of 2021, Canada has earned the title of this year's "Most Improved Side."

The Canadian men were rewarded for gaining 130.32 points in FIFA's ranking system over the last 12 months, fuelled by success in World Cup qualifying and reaching the semifinals of the Gold Cup.

Canada remains unchanged at No. 40, its highest-ever position, in the December rankings released Thursday. John Herdman's team had climbed eight places in the November list.

Canada started the year at No. 72 but has steadily risen thanks to a 13-2-4 record that has seen Herdman's team top the ongoing final round of World Cup qualifying in CONCACAF, which covers North and Central America and the Caribbean.

Canada's lone losses were to the U.S. and Mexico at the Gold Cup. The Canadians have outscored their opposition 55-11 this year.

Canada was 94th, sandwiched between Gabon and the Faroe Islands, when Herdman took over as coach in January 2018. Back then the Canadian men ranked 10th among CONCACAF countries in the FIFA rankings, looking up at Mexico, the U.S., Costa Rica, Jamaica, Panama, Haiti, Honduras, Curacao, and Trinidad and Tobago.

With the schedule hit hard by the pandemic in 2020 — only 352 full internationals were played, the fewest since 1987 (323 matches) — the football world had a lot to catch up on. FIFA say a record 1,116 matches were played this year.

The top 10 is unchanged,

Belgium finishes at No. 1 for the fourth year in a row, ahead of Brazil by just 2.1 points. France is third, followed by England, Argentina, Italy, Spain, Portugal, Denmark and the Netherlands.

Arab Cup winner Algeria moved up three places to No. 29 in the new rankings.

There were 58 matches played since the November list came out. Canada was inactive over the month, but returns to action in the January-February international window with World Cup qualifiers against Honduras, the U.S. and El Salvador.

In February 2002, Canada jumped 20 places to No. 73 in the rankings, courtesy of a third-place finish at the Gold Cup. At the time, it marked Canada's biggest climb up the world soccer ladder since winning the 2000 Gold Cup, when it rose 24 spots to 61st overall.

Canada's lowest-ever ranking was 122nd, in both August and October 2014.

The Canadian women, gold medallists at the recent Tokyo Olympics, are currently ranked sixth by FIFA.