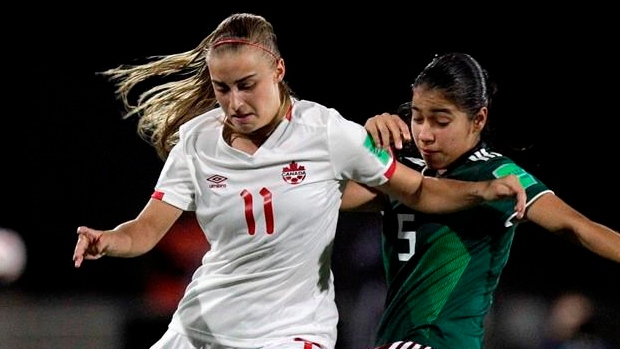 SAN CRISTOBAL, Dominican Republic — Second-half goals by captain Tanya Boychuk and Kaila Novak lifted Canada to a 2-0 win over El Salvador in its opening match Saturday at the CONCACAF Women's Under-20 Championship.

Underdog El Salvador proved to be tough nut to crack in the first half at the Estadio Panamericano where the temperature was near 30 C.

The breakthrough came in the 57th minute when Edmonton's Boychuk poked the ball in after a scramble following a Canadian corner that saw Caitlin Shaw hammer a shot into a penalty box filled with players, including an injured El Salvadoran on the ground. Boychuk had forced the corner with El Salvador 'keeper Paola De Paz making a fine save to palm the Canadian's shot around the post.

Novak made it 2-1 in the 71st minute, capping off a nifty passing play involving Boychuk and substitute Jazmine Wilkinson. The 17-year-old Novak, a native of St. Thomas, Ont., is a UCLA recruit.

Canada will have to play seven games in 15 days if it goes the distance.

The top three teams from each of the four groups move on, joining four pre-qualified teams in the round of 16. The tournament then switches to elimination mode with Canada needing to win round-of-16, quarterfinal and semifinal matches to reach the World Cup.

The winner of Canada's group will face Bermuda in the round of 16.

Anna Karpenko started in goal for Canada behind a backline that included Jade Rose and Emma Regan, who have both spent time with the national senior squad.

Regan, 20, made her senior debut against Cuba in CONCACAF World Cup qualifying in October 2018. Rose, 17, has yet to win a senior cap but has been called into camp twice by national team coach Kenneth Heiner-Moller.

Boychuk had a chance in the 29th minute from a cross by Mya Jones but her shot flashed wide. Novak then came close in the 32nd minute, taking a Boychuk cross and banging the ball off the goalpost.

El Salvador's Yoselyn Lopez had a glorious chance in first-half stoppage time, going in alone on Karpenko. But her flick went wide as the 'keeper rushed towards her.

El Salvador players went down throughout the match, with several returning to the field after being stretchered off.

Canada will likely have to go through the Americans to qualify. Canada is seeded third at the CONCACAF tournament and will face the Americans if they finish first or third in Group C (which includes Cuba, Dominican Republic and Honduras).

Canada has qualified for seven of the nine previous FIFA U-20 World Cups, reaching the quarterfinals in 2004 and 2014 and losing to the U.S. in the final of the inaugural 2002 tournament (when it was under-19) on home soil.

It failed to qualify in 2018, losing to Mexico in a semifinal penalty shootout and then 1-0 to Haiti in third-place game.

The Canadian women are coached by former Canadian international Rhian Wilkinson, who led Canada to fourth place at the 2018 FIFA U-17 World Cup in Uruguay.

It's a measure of the success of the Canadian program that eligible players like Jordyn Huitema, Jayde Riviere and Julia Grosso are not on Wilkinson's roster. They have bypassed the youth level for the senior side.

Winger Olivia Smith, Canada's youth player of the year in 2019, will likely play a leading role at feature at the CONCACAF Women's Under-17 Championship, which runs April 19 to May 3. Just 15, Smith has already won two caps for the senior side.