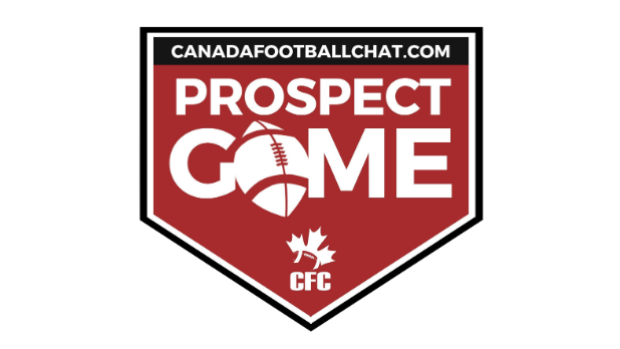 TORONTO (May 3rd, 2022) - Canadafootballchat.com (CFC) and TSN are ready to bring the top high school football talent in Canada back to the national stage for the second edition of the CFC Prospect Game.

After a two year hiatus due to complications from the COVID-19 pandemic, the CFC Prospect Game returns, featuring the top 70 Canadian high school prospects, taking place at TD Place Stadium in Ottawa on Friday, May 27th at 1 p.m. EST.

“CFC is really excited to watch these players compete in this year’s game then continue to track them over their careers.. This year's ten selection camps saw some exceptional performances including the 40-yard speed of all the skill positions." said Lee Barette, CEO of the CANADAFOOTBALLCHAT.COM PROSPECT GAME and president of CanadaFootballChat.com.

CFL on TSN analyst Duane Forde added that these rosters represent an opportunity for Canadians to get familiar with the future headliners they might be watching on Saturdays, or even Sundays.

"The CFC Prospect Game is all about 'opportunity'. It's an opportunity for the top high school players in Canada to go head-to-head with their peers from across the country, and it's an opportunity for Canadian football fans to get a look at the next John Metchie III, Jesse Luketa, Chase Claypool, Chuba Hubbard, or Nathan Rourke before the rest of the world gets to know who they are. This game is always a highlight on my football calendar."

Fans can click here for ticket info to attend the CFC Prospect Game. Each ticket to the game also includes admission to the Ottawa REDBLACKS pre-season game against the Toronto Argonauts kicking off Friday, May 27th at 7:30 p.m. EST.

The inaugural CFC Prospect Game on TSN took place at TD Place Stadium in 2019 featuring 73 of the top Canadian football prospects, including 13 who went on to sign NCAA scholarships. The first edition featured CFL legends Henry Burris and Matt Dunigan as head coaches, with Team Burris prevailing in a fantastic display of Canadian talent with a come from behind 41-24 victory. OT Albert Reese IV, who is with Mississippi State and QB Callum Wither, who is with Ohio, are two alumni to keep an eye on in the NCAA this fall.

The 70 prospects named to the 2022 CFC Prospect Game final rosters were announced during the- CFL Draft on TSN coverage: