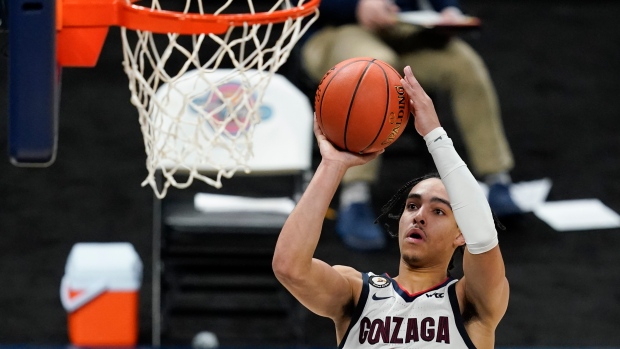 INDIANANAPOLIS — Joel Ayayi matched his career high with 21 points and Andrew Nembhard and Corey Kispert each had, and No. 1 Gonzaga rallied to beat No. 11 West Virginia 87-82 on Wednesday night in the Jimmy V Classic.

The Bulldogs (3-0) struggled to get in sync early and again after freshman Jalen Suggs injured an ankle in the first half. But Gonzaga used a late 13-4 run to take control and scored six straight points late to seal it.

Derek Culver led West Virginia (3-1) with 18 points and 15 rebounds. Oscar Tshiebwe had 14 points and nine rebounds before fouling out with 7:26 to play. The loss snapped a five-game winning streak and dropped the Mountaineers to 0-5 in the series.

This did not look like the same Gonzaga team that won two shootouts last week.

The shooters struggled early and just when it seemed they were about get on track, Suggs slid through the lane, hurting his left ankle. He stayed on the ground for several minutes and needing help to reach his chair.

West Virginia took advantage of the momentum swing with a 14-3 run that gave it a 33-24 lead late in the first half.

When Suggs returned in the second half, Gonzaga charged back. It retook the lead on Kispert’s layup with 9:46 to play and seized control with Kispert and Ajayi combining for nine points in the decisive run.

West Virginia: The Mountaineers weren't even supposed to be here — until a COVID-19 outbreak forced No. 13 Tennessee to back out. But coach Bob Huggins and his teams never back down from a challenge. They didn't Wednesday and they certainly made it an interesting game.

Gonzaga: It looks like the poll voters got this one right. The Bulldogs have opened this season with wins over two top 15 foes — Kansas and West Virginia — as well as Auburn, all on neutral courts. And they're beating all comers.

Suggs was in pain from the moment he went down. He held a towel over his face and then continued to wince and writhe on the socially-distanced bench. Eventually, he stood up and walked gingerly to the locker room but did not return with what the team called an injured left ankle. Somehow, he made it back on the floor in the second as one of the catalysts of the comeback.

West Virginia guard Sean McNeil also left during the first half after taking an elbow to the forehead. McNeil was called for a foul on the play as he tried to take a charge. He returned to action later in the first half — with four stitches.

West Virginia: At Georgetown on Sunday.

Gonzaga: Vs. No. 2 Baylor on Saturday in Indianapolis.