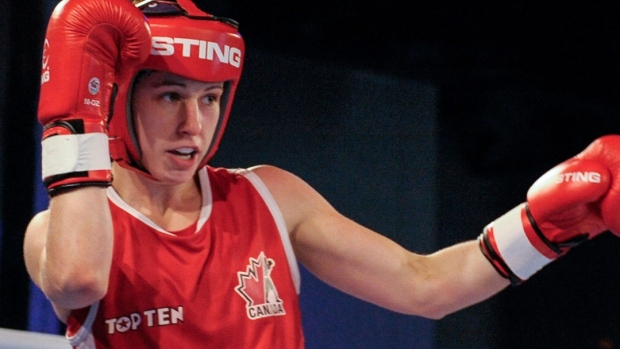 Canadian boxer Mandy Bujold plans to take her fight for a berth in the Tokyo Olympics to the Court of Arbitration for Sport.

Bujold and her lawyer Sylvie Rodrigue petitioned the International Olympic Committee for a berth based on her pregnancy and maternity leave, and had hoped for a decision by Friday.

But Bujold said in an email "we are disappointed and quite frankly surprised that neither the IOC or the (Olympic Boxing Task Force) have yet responded" to her lawyer's letter sent April 23.

"They have not reached out yet to indicate if they are planning to rectify the qualifying rules to accommodate female athletes who were pregnant or postpartum during the chosen qualifying period for Tokyo."

After a competitive year wiped out by the global pandemic, the 11-time national flyweight champion had been confident she'd clinch a berth at the Olympic qualifying tournament in May in Buenos Aires, but the event was recently cancelled due to climbing COVID-19 case numbers in Argentina.

"Should we not hear anything at all by Monday, we will have no choice but to pursue a discrimination legal challenge before the Court of Arbitration for Sport. We are also exploring other legal avenues," Bujold said.

With no competitions now on the schedule, the IOC revised its ranking system, using three events between 2018 and 2019 to determine the four available spots in Bujold's weight class. The 33-year-old from Kitchener, Ont., had been ranked second before her maternity leave, but didn't compete in the three events used in the revised ranking because she'd just given birth to daughter Kate Olympia.

The continental qualifiers were originally scheduled for last March, but scrapped due to the pandemic.

Bujold, a two-time Pan American Games champion, would be the first female to box for Canada at consecutive Olympics if she can secure a berth. An illness derailed her dreams at the 2016 Rio Games. Hours before her quarterfinal loss to China's Ren Cancan, she was ill in hospital on an I.V. She had to settle for fifth.

Olympic qualifying has been a massive challenge particularly in countries like Canada with tight travel restrictions.

"I'm not sure what the proper resolution is," he told The Canadian Press earlier this month. "I think the idea now is to find some way that will avoid this kind of a casualty, resulting from the sole fact that the athlete is female.

"I think the IOC is wrestling with this. How they'll solve it I don't know. I think at this point, with a lot of the qualification meets are getting cancelled or postponed, it's up to whoever's organizing things, either the (international federation) or the IOC in this case, to find some kind of way that will be as undisruptive as possible, in circumstances."