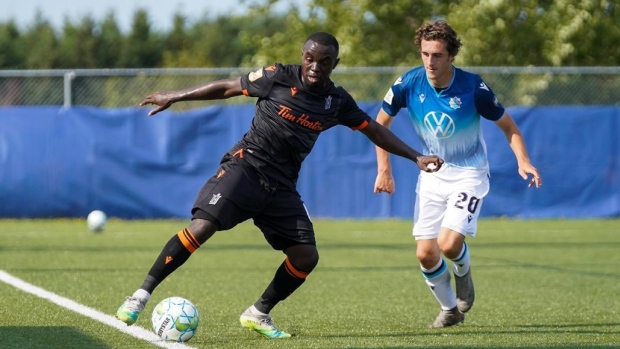 VANCOUVER — Kwame Awuah believes he has more to give a Major League Soccer club — and he believes the Vancouver Whitecaps are that club.

The 26-year-old Toronto-born defender is getting a chance to make his case this week as he joins Vancouver's pre-season training camp on trial.

“I knew this was a place I could take a step in the right direction to achieve my ambitions and help the team to achieve their goals as well," he said.

It's been three years since Awuah parted ways with New York City FC, the MLS team that drafted him from the University of Connecticut in 2017.

He went on to ply his trade in the Canadian Premier League, helping Hamilton-based Forge FC to three straight stellar campaigns, including back-to-back championships in 2019 and 2020.

The left back tallied a goal and three assists in 26 CPL appearances in 2021 and added another crucial goal in a CONCACAF League game.

“Coming into the CPL, you didn’t know what to expect," he said. "But the last three years have probably been the best three years of my career. I came off two years at NYCFC where I was learning how to be a pro and just a day-in, day-out grind. And I took that experience into Forge and became a leader."

Whitecaps sporting director and chief executive officer Axel Schuster said Awuah has the flexibility to fit into the Whitecaps' system.

"What we really see in him is that he fits in our system because we play with the wingback positions but out wing backs and our centrebacks have to interpret their roles in a certain way. And he has this versatility," he said.

Awuah is one of seven unsigned players at the 'Caps pre-season camp. The team also brought in striker Tossaint Ricketts and goalkeeper Isaac Boehmer, who both played for the club last season, and four players Vancouver picked up in the 2022 MLS SuperDraft.

“No one seemed, I would say, a fish out of water," Whitecaps head coach Vanni Sartini said of the new faces on Monday. "They looked all sharp and ready to be fighting for a spot."

Training camp will give staff an opportunity to see how the unsigned talent might fit into either the first team or the coming MLS Next Pro squad, he added.

The club is keen to add more depth to the roster, Schuster said.

"We like to have a lot of young guys competing because a competition and getting challenged every single training to see your opponent, to see a good strong opponent there is also helpful to grow as a player," he said. "We want to find out if (Awuah) can be that challenger for (Gutierrez) so that at the end both players become a better player."

In his brief time at the helm last season, Sartini was known for juggling his lineup. The then-interim coach used 22 different players in the starting 11 across 14 games.

The moves paid off with the 'Caps going 7-2-5 across the stretch and securing their first playoff appearance since 2017.

"You have to earn your spot in the squad. And everyone can earn his spot in the squad," Sartini said. "So every week will be like a competition to try and be in the starting 11, to try to be even on the bench. I think everyone now has the opportunity to be on the team and be a protagonist.”

Awuah has long watched the Whitecaps from afar, following the progress of several of his friends.

There's his former college roommate, Jake Nerwinski, who's blossomed into a stalwart defender for the team, and Russell Teibert and Lucas Cavallini, who he befriended through the Canadian national team.

Awuah thinks there's a lot he can add to the group, including technical ability, defensive security and some levity in the locker room.

And as the 'Caps push to make the playoffs an annual occurrence, it doesn't hurt that he's played in a lot of big games in recent years.

“I was able to experience a lot of games in CONCACAF, a lot of championship games. So I think I know what it takes to win," Awuah said. "And I think it can translate coming back to this level.”

This report by The Canadian Press was first published Jan. 18, 2022.