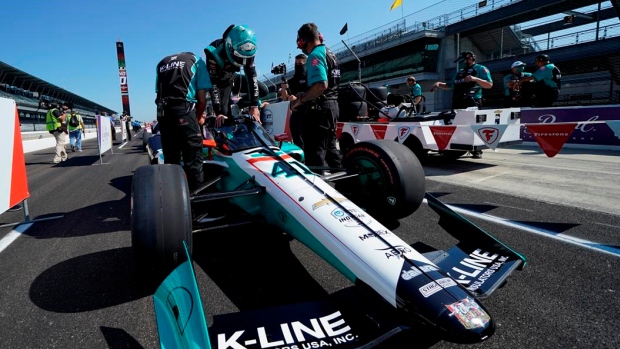 After just two seasons — and only one full campaign — on the IndyCar circuit, Canada's Dalton Kellett is entering his third year as the seasoned veteran for A.J. Foyt Racing.

Kellett, from Stouffville, Ont., re-signed with Foyt in December, where he'll drive with Indy Lights champion Kyle Kirkwood in what is expected to be a two-car team.

It's a big change for Kellett, who had been the junior member of the team until now, but he feels good with a couple of years under his belt on North America's top open-wheel circuit.

"I'll be going into the season with some confidence as far as really being assertive with communicating with the engineer, to know what I'm looking for going into the weekend," said Kellett on Friday of preparing for races. "I think that'll be a that's been a good lesson to learn in a sign that comes with experience."

Kellett's rookie IndyCar season was abbreviated by the first wave of the COVID-19 pandemic when he raced alongside Tony Kanaan. In 2021 he was teamed with Charlie Kimball and four-time champion Sebastien Bourdais.

"The experience in the first couple years was great," said Kellett. "I had the amazing opportunity to be surrounded by some obviously, big names in IndyCar and racing.

"Those first couple years were really helpful for learning under those guys, how they work with the engineers to get what they needed out of the car."

He's working at his fitness this winter so he's better prepared for the rigours of a full season behind the wheel. In particular, Kellett said he wanted to work on his upper body's endurance because toward the end of a race when the tires have more grip and the gas tank is full the steering wheel was especially heavy for him.

"In the past, we've focused on all body work, upping the strength level in general," said Kellett, who bulks up in the off-season and the tries to maintain his body mass when racing. "We're biasing it a bit more toward upper body this year, just to make sure that as far as the steering load's concerned, everything's sorted and good to go."

Kellett still has yet to race Honda Indy Toronto at the IndyCar as it has been cancelled the past two seasons due to COVID-19. He's hoping that he will finally be able to make his home-race debut this summer and also once again qualify for the Indianapolis 500, the biggest open-wheel race in North America, in the city where he and his fiancée Nicole live.