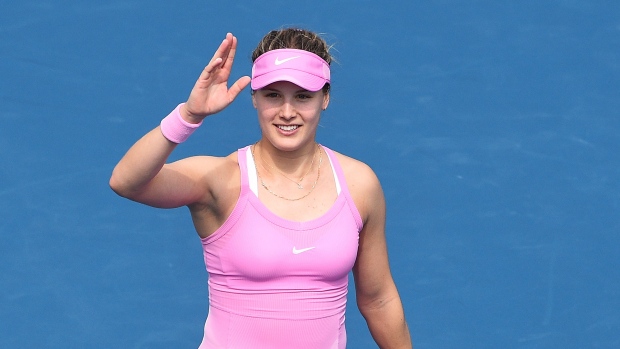 ISTANBUL — Canadian qualifier Genie Bouchard has advanced to the final of the Istanbul Tennis Championship.

Bouchard, from Westmount, Que., beat world No. 94 Paula Badosa of Spain 6-3, 6-2 in the semifinals of the WTA Tour clay-court event on Saturday.

"I am specifically proud with how i handled myself every day because I've had to play a match every day," Bouchard said.

"Tomorrow's going be my seventh day in a row so it's kind of playing the same number of matches to get to the final of a Slam. It's like playing a Grand Slam but in half the amount of time."

The 26-year-old Canadian, ranked 272nd in the world, saved six of seven break points against Badosa.

Bouchard, who won two qualifying matches to get into the main draw, will play No. 88 Patricia Maria Tig of Romania.

It will be Bouchard's first final since 2016. Her only career tournament title came in Nuremberg, Germany in 2014.

A former world No. 5 after reaching the final of Wimbledon in 2014, Bouchard's ranking has tumbled in recent years,

Bouchard's ranking is projected to rise to No. 163 if she loses the final. If she wins, she'll crack the top 150.

Because of her ranking, Bouchard has no idea what's next on her schedule. The U.S. Open didn't have qualifying this year because of COVID-19, preventing lower-ranked players from having a shot to get into the main draw.

"I want to play as much as possible," she said. "Anywhere I can get in with my ranking or with a wild card is where I'm going to go play. Things are a little more last minute these days with this kind of abbreviated schedule."

This is Bouchard's third run to at least the quarterfinals this year. She reached the quarterfinals in her first tournament back from the COVID-19 suspension last month before losing in three sets to world No. 18 Elise Mertens in Prague.

At the start of the week, Canadian Fed Cup captain Heidi El Tabakh​ was predicting big things for Bouchard.

"She's one of the girls who was lucky to play a ton of matches with World Team Tennis and also the tournament in Charleston so she did have that advantage of getting matches in before she started tournaments," El Tabakh said. "She's super eager to get back to where she belongs, in the top 100, and if she mentally adjusts to playing these smaller tournaments and is able to bring her best tennis it’s going to get her into bigger tournaments really soon and she'll be back in no time."

Note to readers: This is a corrected story. An incorrect result from Eugenie Bouchard's Wimbledon appearance in 2014 appeared in a previous version.