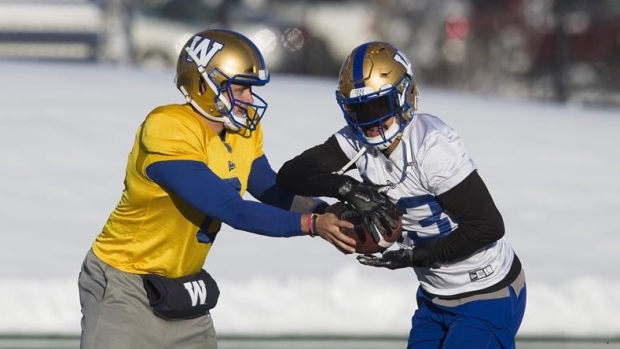 The Winnipeg Blue Bombers opened up their practice facilities on Thursday. Meanwhile, the remaining teams are in the planning stages as they continue contact with health officials during the coronavirus pandemic.

Protocols for Bombers training will include each player being screened for their health prior to entry and must schedule their workouts in advance with the head trainer. There will be one trainer working with one player with a max of two players with two training at the facility.

"We're going to be discussing that this week," CFL commissioner Randy Ambrosie told The Canadian Press on Tuesday. "We want to be very cautious and part of the process is you have to be certain you can do it right... you have to not only have a good plan but be able to execute against that plan."

The CFL sent a memo to its member clubs Wednesday allowing local players to participate in training or receive treatment at their respective club's facility.

However, the league stipulated the reopening of facilities must "permitted by your local provincial and municipal public health authorities."

The Saskatchewan Roughriders could be next to open with Phase 3 of the provinces reopening strategy set to take place on June 8.

The Calgary Stampeders could return to training as soon as June 4. The team is submitting a proposal for protocols to submit to local authorities for approval.

The Edmonton Eskimos have just begun conversations about returning to training.

The BC Lions are awaiting provincial approval before they can reopen their facilities. Currently, injured players are permitted to entre for treatment, one at a time.

The Toronto Argonauts could return to their practice facility on June 8. The team is "currently working through protocols, similar to the reopening of the other MLSE teams’ facilities based on government and respective league approvals, to make the facilities available to players for individual workouts and treatment where required," according a spokesperson for MLSE.

The Ottawa Redblacks are talking to local officials. No timetable has been set for a return.

The Hamilton Tiger-Cats facility is city owned. No timetable has been set for a return.

The Montreal Alouettes do not have any workouts pending or any plans to open any facilities in the short term. The team's office and workout facilities remain locked down.

Last week, the CFL announced that the earliest it could begin play would be September, meaning the cancellation of this year’s Touchdown Atlantic contest between Toronto and Saskatchewan, which was set for Halifax on July 25.