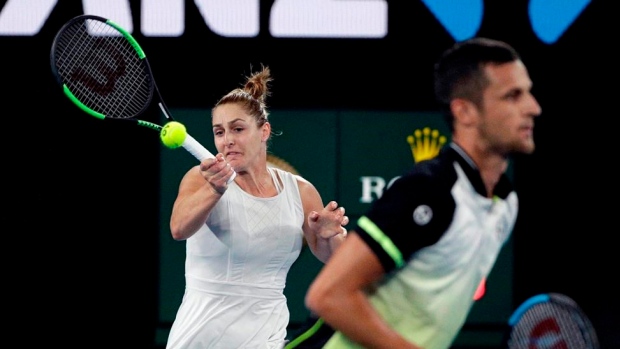 PARIS — Canada's Gabriela Dabrowski is off to the French Open mixed doubles final for the third year in a row.

The second-seeded team of Dabrowski and Mate Pavic of Croatia beat unseeded Nadiia Kichenok of Ukraine and Ausam-Ul-Haq Qureshi of Pakistan 6-7 (4) 6-1, 10-8 in semifinal action on Thursday.

Dabrowski and Pavic will face Latisha Chan of Taiwan and Ivan Dodig of Croatia in a rematch of last year's French Open final, won by the latter squad.

The unseeded Chan and Dodig upset No. 1 seeds Nicole Melichar of the U.S., and Bruno Soares of Brazil 6-1, 6-2 in semifinal action on Thursday.

Dabrowski, 27, and Pavic are looking to win their second Grand Slam mixed doubles title together after capturing the 2018 Australian Open.

In Thursday's semi, Dabrowski and Pavic had a big edge on first serve. They won 66 per cent of their points on first serve, as compared to 50 per cent for their opponents.

Meanwhile, Leylah Annie Fernandez of Laval, Que., has advanced to the girls' singles semifinals after winning two matches on Thursday.

The No. 1 seed bagelled unseeded Elsa Jacquemot of France 6-0, 6-0 in a quarterfinal after beating Sohyun Park of Korea 6-2, 6-0 in the third round.

Fernandez, 16, a runner-up at the Australian Open, will faces Colombia's Maria Camila Osorio Serrano in the semis.