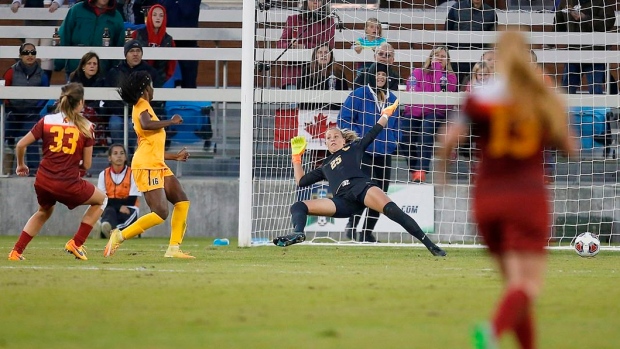 The 21-year-old joins the Reds after four years at West Virginia University. Born in Kitchener, Ont., and raised in Cambridge, Ont., Foster started 84 games for the Mountaineers and finished second in program history with 39 shutouts and 7,670 minutes played.

"It's about signing a good quality goalkeeper that brings competition to our current squad," Liverpool manager Vicky Jepson said. "She's a fantastic fit for us for the future."

Foster wears her allegiance to the Reds on the inside of her left bicep, where a tattoo reads "You’ll Never Walk Alone," the title of Liverpool's famed anthem.

“I got the tattoo in 2014 after my grandmother passed away," Foster explained. "My grandparents are both from Wavertree in Liverpool but moved away during the war. It's just a commemorative thing to show that they are always with me."

Foster, who will wear No. 13, says playing for Liverpool was a childhood dream.

The Liverpool women currently stand 11th in the 12-team FA Women's Super League with a 1-8-3 record. The team's other goalkeepers are Germany's Anke Preuss and England's Frances Kitching, both former under-20 internationals.

Foster was 15 years old when she made her debut in the Canadian youth program in 2013. She has represented Canada at both the under-17 and under-21 levels.

Foster is a two-time Academic All-Big 12 First Team honouree and a member of the Big 12 Commissioner's Honour Roll. She was named to the All-Big 12 First team once and to the second team three times during her collegiate career.

This report by The Canadian Press was first published Jan. 23, 2020.