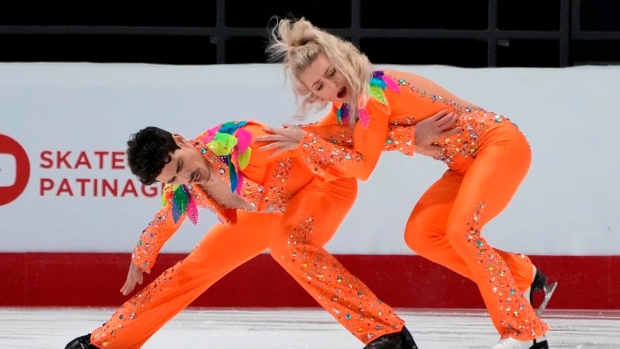 Coach Carol Lane had her back turned when Paul Poirier's blade caught an edge in practice.

He and partner Piper Gilles were doing twizzles, a technically difficult ice dance element that requires perfect synchronicity, but not one that often results in catastrophic injuries. It's an element they've done countless times in their careers.

But Poirier's blade stayed put in the ice, and his body kept going.

His broken ankle, just a few months before the 2014 Sochi Olympics, took three plates and 13 screws to repair.

"We didn't think he would walk again, it was such a bad injury," said Lane, Poirier's coach since he was nine. "I remember seeing him a couple of days after the surgery, and leaving his house and just bursting into tears in my husband's arms and saying, 'I don't think he's ever coming back. How is he going to do it?' Because he was just so broken.'"

Sochi would have been a fabulous comeback story. Gilles, who grew up in Rockford, Ill., the hometown of Toronto Raptors guard Fred VanVleet, had just received her Canadian citizenship in time to compete for Canada. Poirier's ankle mended. But the duo finished fourth at the trials, narrowly missing a spot at the Games.

"So, that was the first trial by fire," Lane said.

There would be more.

At the Pyeongchang Olympics in 2018, Gilles' mom Bonnie was in the late stages of brain cancer — or glioblastoma, the same cancer that killed Tragically Hip frontman Gord Downie. Gilles and Poirier finished eighth. Back home, Bonnie's friends and caregivers threw a viewing party, dressing her in a Canada T-shirt and hat.

Gilles was told her mom, who would die three months later, clapped during their skate, and had a tear in one eye.

“She must have known," Gilles would say later. “Those little things, they mean more than anything — those little tiny moments."

Gilles has since done fundraising shows and been a spokesperson for brain cancer research.

The reigning world bronze medallists are hoping to climb the medal podium at the upcoming Beijing Olympics. They'll skate their free dance to Govardo's cover of The Beatles' melodic "The Long and Winding Road."

The song, said Lane, is both a reflection of the ice dancers' journey, and their aim to be accessible to skating fans.

Govardo — a U.K. Indie band of Jack Rose and Dom Sky — crafted the cover for the skaters, after they'd competed to Govardo's version of "Vincent" in 2018.

The pair of 30-year-olds, in an interview this week as part of their promotion of Cheerios' "Be The Cheer" campaign, said they've come into their own in the past couple of years, and despite the COVID-19 pandemic that has run roughshod through the international figure skating schedule since the world championships were cancelled way back in March of 2020, they're enjoying this place in the road.

"If I look back on our entire body of work, but especially on our body of work for over the last four years, since Pyeongchang, I think we've really evolved as humans and as artists, and as athletes … we've really grown and refined who we are and found clarity in who we are," said Poirier, a native of Unionville, Ont. "And I think this year is really a celebration of that, I think the road that has brought us here has brought us a lot of those answers."

Poirier competed at the 2010 Olympics with Vanessa Crone. They parted ways a year later. Poirier held partner tryouts with several skaters before Gilles travelled to Toronto for a tryout. Poirier knew of Gilles; she's from a well-known American skating family — her twin sister Alexe competed in singles, while older brother Todd was an internationally ranked ice dancer.

The physical side of a partnership, how well two bodies can move in sync, was obvious almost immediately, Gilles and Poirier said. They shared the same grittiness in how they attacked skating.

The potential obstacles are in everything else, such as: are their work ethics aligned?

"We make these great life-changing decisions in skating," Lane said. "You would be horrified if your child came home and announced they were marrying someone, you'd be like, 'Oh, my God, you don’t know each other, how do you know it’s gonna work?' But that's what you do, and it worked out very well."

Skaters can spend more time with their competitive partners than their significant others. If the first few months are the honeymoon period, "then it's showing up at the freezing cold rink every morning at six o'clock."

Gilles and Poirier knew their partnership would take work off the ice to thrive.

"The most important thing we did was we really listened to each other, we learned about how they function, how they think, how they process, how they compete," Gilles said. "By being so patient, we became friends, and really let ourselves be open and honest with each other about what we needed, and we just developed something very special … that came with maturity, and that came with time."

After skating in the large shadow of two-time Olympic champions Tessa Virtue and Scott Moir for years, Gilles and Poirier head to Beijing as Canada's best chance at a figure skating medal on a team with no gold-medal favourite for the first Games in a long while.

Whether or not they do climb the podium, and if they decide to retire after Beijing — Lane said they're undecided — they'll be proud of the unique stamp they've left on the sport.

"We really want to enjoy this place of clarity about who we are with each other. And the Olympics is a celebration of that, of course we want to win a medal, and of course we'll be disappointed if we don't. But I think we will always be proud of the work that we've done."

Lane said who they are as people means more to her than what they do on the ice.

"They are most genuine, authentic people you could ever wish to deal with. They are straightforward. They are honest. They're direct. They're hardworking. They're just lovely people. They understand what's really important in life, in treating people well, being honest, being dependable, and working hard," she said.

Lane cherishes the 20 years she's had coaching Poirier, saying that length of time is very rare in sports. And she appreciates how Gilles, who she calls "my sunshine girl, because she brings sunshine to everything that she does" left her home and family and fully bought into what Lane and Poirier wanted to achieve.

Figure skating begins with the first day of the team event on Feb. 4, the same day as the opening ceremonies. The rhythm dance is Feb. 12, while the free dance is Feb. 14.

This report by The Canadian Press was first published Jan. 21, 2022.