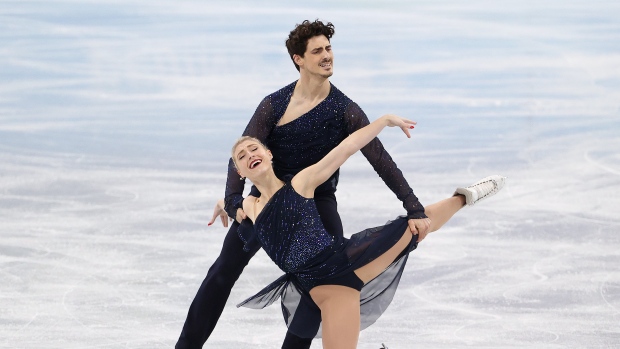 Gilles and ice dance partner Paul Poirier had their sights set on the medal podium at the Beijing Olympics as the reigning world bronze medallists.

But the Canadians have some major ground to make up after finishing sixth in the rhythm dance, losing precious points on their "twizzles," side-by-side one-footed turns that travel across the ice. They must be in perfect synchronicity. An element that's unique to ice dance, twizzles can make or break a performance.

"I'll replay it for sure," Gilles said. "But you know, it's a new day on Monday (the free dance) and I’m excited to kind of have a fresh slate."

Skating to Elton John, and dressed in neon orange bodysuits — Gilles' was backless, while Poirier's had a deep V-neck — the Canadians scored 83.52 points.

France's four-time world champions Gabriela Papadakis and Guillaume Cizeron, who were runners-up to Canada's Tessa Virtue and Scott Moir four years ago in Pyeongchang, scored 90.83 to move into first place.

Russians Victoria Sinitsina and Nikita Katsalapov, the current world champions, scored 88.85 points to settle into second, while Americans Madison Hubbell and Zachary Donohue, who finished second at the 2021 world championships and fourth in Pyeongchang, were third on Saturday with 87.13 points.

Gilles and Poirier, who are both 30, long skated in the shadow of Virtue and Moir, but the Beijing medal podium has been a target for awhile for the Canadians, who narrowly missed qualifying for the 2014 Games and then were eighth in Pyeongchang.

Toronto's Gilles and Poirier, who's from Unionville, Ont., said they would use Sunday to regroup before Monday's free dance, which is a more romantic dance to Govardo's cover of The Beattles' "The Long and Winding Road."

"I think it'll be nice to kind of have a day off, just kind of rest our legs a little bit, get another practice of the free dance in and then go for it in the next two days," Gilles said. "I think we're getting used to having these days off in between, which is something that we're really not used to, but I think we're happy about it and just kind of reset for Monday."

Gilles and Poirier could still win a medal in the team event if Russia is disqualified after it was revealed 15-year-old star Kamila Valieva tested positive for a banned heart medication. Canada was fourth behind Russia, the United States and Japan, but the medals are yet to be awarded.

Gilles and Poirier, who weren't part of the Canadian squad that won gold in the team event in Pyeongchang — Virtue and Moir skated both the short and free dances — said they hadn't spent much time thinking about the possibility.

"It's one of those things that's really out of our hands," Poirier said. "We don't have a lot of information about it right now, and it's not something that we can actively change.

"Right now, especially with the intensity of this competition, we really wanted to focus on our skating. It's going to be a very long process. And we don't know when there will be news or if there will be news. And so, I think it's kind of futile to give mental energy to it right now."

Canada's Laurence Fournier Beaudry and Nikolaj Soerensen, who used to compete for Denmark, scored 78.54 in their Olympic debut, good enough for eighth place.

Fournier Beaudry is from Montreal, while Soerensen was born in Copenhagen, but she was unable to receive Danish citizenship in time to compete at the 2018 Olympics, and Denmark released them the same year to compete for Canada.

"We're really, really happy about how we skated, we had a lot of fun," said Fournier Beaudry, who wore a bright pink dress for their program to a George Michael medley. "And we couldn't ask for more. I think that was our main goal coming here. And it's a program where if we don't have fun, it's not fun."

Saturday's music featured everything from Donna Summer to Aretha Franklin to Tina Turner, Usher and Rihanna. The International Skating Union determines a rhythm theme for the short dance. In 2018, it was Latin music. Virtue and Moir skated to a medley of the Rolling Stones, the Eagles and Santana en route to a world-record score.

The free dance is Monday.

This report by The Canadian Press was first published Feb. 12, 2022.