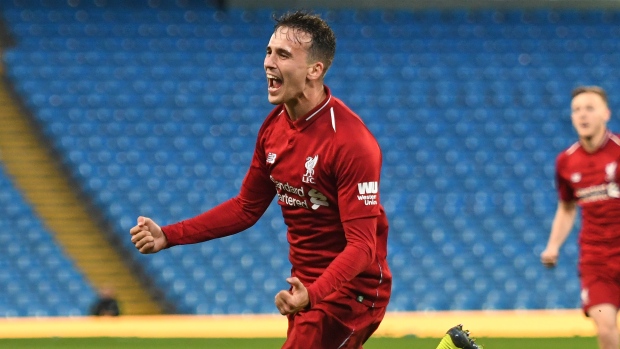 A Canadian waits in the wings as the Premier League returns to action Wednesday.

Canadian international Liam Millar made his first-team debut for Liverpool in February in a young Reds side against third-tier Shrewsbury Town in FA Cup play.

The 20-year-old from Brampton, Ont., whose preferred position is left winger although he can also play on the right or up front, impressed during two loan spells at Scotland's Kilmarnock and hopes to go out on loan again to get playing time while moving up the ladder.

"I'm aiming for the English Championship hopefully," he said, referencing England's second tier. "I think it's probably the best second league in the world.

"It's also one of the toughest league's too because you have a game every three days. It's back-to-back, back-to-back and I think it's the perfect thing that can help me get to the Premier League and be ready for it."

A regular for Liverpool's under-23 side, Millar had a night to remember in the fourth-round replay against Shrewsbury before a sellout crowd of 52,399 at Anfield. With U-23 manager Neil Critchley running the show, Liverpool fielded a lineup with an average age of 19 years 109 days, the youngest starting 11 in club history.

A special night, all around, with Liverpool winning 1-0.

"One of those days, one of those times where you just kind of have to sit back and just realize where you are and what you've accomplished," Millar said. "And even though for me it's just the first step for what I want to do with my career, just to be the first Canadian to ever play for Liverpool was a big achievement for me.

"I was very proud and kind of overwhelmed after the game."

Liverpool manager Jurgen Klopp fielded the young side — and elected not to take in the match — because it was scheduled during the Premier League's winter break.

Millar's time in Scotland prepared him for the Cup game after playing before big crowds at Celtic Park and Ibrox. But against Shrewsbury, the big crowd was roaring his team on.

"It was honestly unbelievable ... the highlight of my career so far," he said.

While a young man, Millar has worked long and hard to get where he is. His family also made sacrifices for the cause with his parents living apart for stretches so Millar wouldn't be alone in England.

His dad coached one of the North Mississauga teams, often with Liam in tow. Liam, who was 10 at the time, convinced him to take him to the Keele Cup in England.

When he got there, another team was missing a body and Alan volunteered his son. Liam recalls scoring some 15 goals in three games, drawing the attention of several scouts.

He ended up moving to England with his dad to pursue his soccer dream when he was about to turn 13.

"He quit his job. He moved his whole life ... He just basically said to me 'We're going to try this. If it doesn't work out, we can happily go home.'"

While other teams also offered tryouts, he chose Fulham because it was the highest-ranked team at the time.

Initially it was a two-week trial. Six months later, he returned for a six-week trial and was signed two weeks in.

It wasn't easy, leaving his mother, brother and sister as well as friends. While Millar admits to a few tears, he says "Nobody wanted it more than me at the time."

"I realized I had to make sacrifices to do what I wanted to do ... There were times when I didn't see my mum for a year, a year and a half," he added.

As the years progressed, the family was reunited in Liverpool. His sister and brother came first, then his mother who continues to go back and forth.

His parents both work in the TV and film industry. His mother is a makeup artist and his father is a "spark" (electrician) whose credits include several seasons of "Game of Thrones."

Liam enjoyed his time at Fulham, saying it changed his view of football. The focus was on getting better rather than winning in the 12 to 15 age group.

A fine under-16 season and impressive performance against Liverpool in a friendly earned Millar an offer he couldn't turn down — especially after visiting the storied club.

"The second I got there, it felt like a family-oriented club and somewhere where I wanted to be," he recalled.

He has worked his way up the club ranks and now plays for the under-23 side, which is essentially Liverpool's reserve team. While they train separately from the first team, the two sides have ties with players moving in both directions during different sessions.

Toronto FC fans will lament that a young Millar — at 10 or 11 — was cut during the tryout process with the MLS club academy.

"Basically I was told I was too small and maybe when I grow (to) come back and we'll see what happens from there," he said.

While heartbroken at the time, he says he used the snub as motivation.

"I wanted to prove to TFC that they made a big mistake. And one day they'll be begging for me back, hopefully. We'll see what happens with that."

Millar's recent time in lockdown comes with his wife expecting their first baby in September. The couple have been staying with Millar's family.

Millar, who has eight caps for Canada, was 14 when he made his debut in the Canadian youth program in 2014. He made his senior debut in March 2018 against New Zealand in John Herdman's first game at the men's helm.

Millar, then 18, recalls Herdman's words to him when he arrived in camp.

"First thing he said to me was 'Play without fear. You have nothing to lose here ... Just go out there and have fun and enjoy the experience.'"

Millar, who counts Canada captain Scott Arfield as a friend and mentor, has the distinction of never having lost while representing Canada at the senior level.

Miller has also benefited from playing under some good managers at the club level including Steve Clarke, a former Chelsea and Scotland player, and Angelo Alessio, a former Juventus midfielder, at Kilmarnock. In addition to Critchley, he also spent time with Steven Gerrard at Liverpool before the former Reds captain-turned-coach took over Glasgow Rangers.

Millar signed a new long-term contract with Liverpool in January 2019.