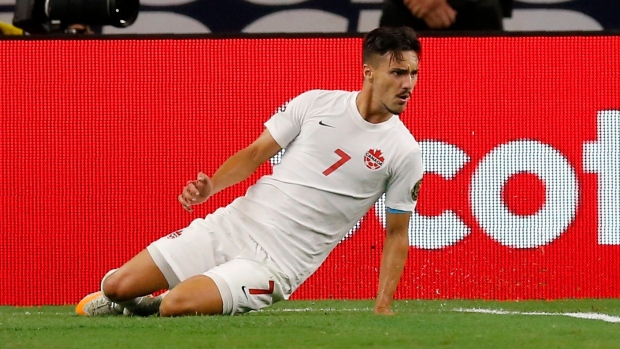 The Canadian men take on CONCACAF powerhouse Mexico in the Gold Cup semifinal in Houston, hoping to reach the championship game for the first time since 2000.

Canada beat the Mexicans 2-1 in the quarterfinals that year, thanks to an extra-time goal by Richard Hastings, and went on on to defeat Trinidad and Tobago 1-0 in the semis and Colombia 2-0 in the final to complete an unlikely tournament run that required winning a coin flip over South Korea just to reach the knockout rounds.

Canada, currently ranked 70th in the world, has not beaten No. 11 Mexico since, going winless in eight matches (0-6-2) while being outscored 16-4.

Herdman says his team is on the right track, after dominating No. 50 Costa Rica 2-0 in the quarterfinals.

"We had a big win against Costa Rica. We had a good performance against the U.S. (a 1-0 loss) in this tournament," he said in a virtual media availability. "But we know that that one next step further for this country would be to tip the Mexicans up. If we could do that, I think it'll be a huge celebration back home."

"One thing we do know is it's not going to be an easy night. It never is against Mexico," he added.

But this is a vastly improved Canadian squad. And one that will be even better in the future when the likes of Alphonso Davies, Jonathan David, Atiba Hutchinson, Milan Borjan, Scott Arfield, Cyle Larin and Ayo Akinola are all healthy and available.

Canada (3-1-0) will face Mexico (3-0-1) without captain/defender Steven Vitoria and striker Lucas Cavallini, both of whom are suspended after picking up a second yellow card.

"It's difficult but this is tournament football," said Herdman. "You've got to expect those punches in the face. If we're suffering, typically other teams are as well."

Thursday's game marks a return to NRG Stadium, which is filled with some bitter memories for Herdman's team. Canada blew a 2-0 lead against Haiti in the 2019 tournament quarterfinal, eventually losing 3-2.

"The last Gold Cup we had to learn some lessons," said Herdman. "I think as a coach you're always learning and I certainly learned a few lessons in that moment. But it's two years ago."

The Canada coach said his group has been hardened in the time since, with confidence mounting as a result.

Herdman expects this edition of Mexico to be no different than those in the past, citing the pressure it will look to exert on Canada.

"It's a good opponent for us at this stage," he added. "We've got a Gold Cup final only one game away. Our players are nothing but excited for this test. And we'll embrace whatever's going to get thrown at us."

Mexico has yet to concede a goal at the tournament and will have the crowd's support behind it. But that does not faze Herdman or his team.

"We'll just be out there enjoying that moment and playing for our country," he said. "And hopefully putting a performance on that allows is to take on more step into a final and really give this country something to celebrate."

Guest entry Qatar, ranked 58th, faces the 20th-ranked Americans in the opening game of the doubleheader Thursday in Houston

This report by The Canadian Press was first published July 28, 2019