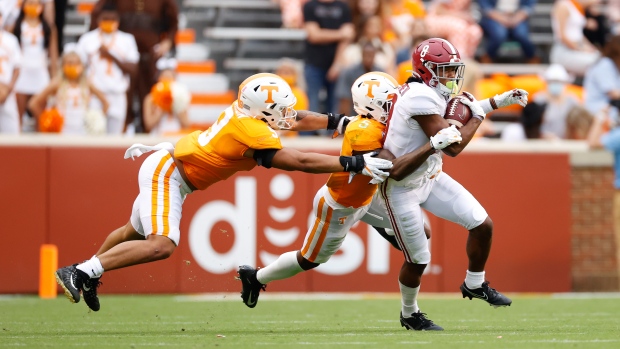 Saturday's college football game between No. 2 Alabama and Tennessee featured a special Canadian connection, as a pair of wide receivers from the same hometown in Ontario went up against one another.

John Metchie III, who has had a breakout season, was dressed in Alabama's crimson and white uniform, while his fellow Brampton, Ontario, native, Josh Palmer, was decked out in Tennessee's orange and white uniform. The Canadians are well acquainted with one another, having developed a friendship since they played youth football in Brampton, they told TSN Football Insider Dave Naylor this week.

Metchie earned bragging on Saturday, as his squad ultimately triumphed over Palmer's 48-17 in the contest between the two Southeastern Conference schools. While both Canadians put up impressive performances, Metchie had the stronger game, leading Alabama in both catches (7) and yards (151). Palmer finished with 57 yards on four receptions and hauled in one of his team's touchdowns.

Their win over Tennessee moved Alabama to a 5-0 record in the midst of their COVID-19 delayed season, while Tennessee's record dropped to 2-3.

Looking forward, Metchie, who has two more years of NCAA eligibility following this season, has a good opportunity to improve upon his breakout campaign, as Alabama's leading receiver entering Saturday, Jaylen Waddle, is out for the rest of the season after breaking his ankle against Tennessee. Waddle’s injury should result in Metchie being targeted a lot more.

Palmer, meanwhile, will look to strengthen his resume as he completes his final year of NCAA eligibility and looks ahead to a career that will likely see him playing professional football the following season.