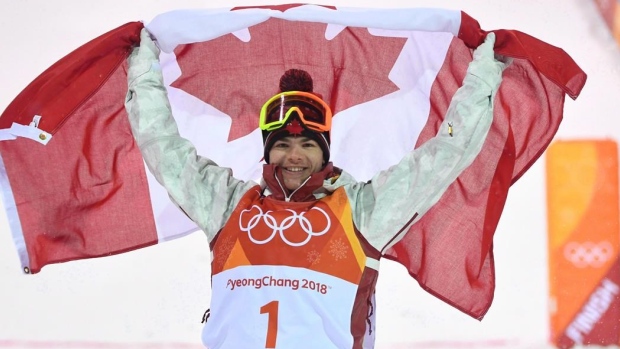 Kingsbury, from Deux-Montagnes, Que., won the dual moguls event Tuesday at the world championship, one day after capturing the moguls crown.

Kingsbury became the first skier in history to defend both world titles — he also recorded the double in 2019.

"I'm just very excited and happy to win my sixth title. I know that right now in my sport, I'm the guy that's won the most ... world championships in history," Kingsbury said.

"(Monday) was a good domination from my side. (Tuesday), I wouldn't say I dominated but I was the smartest out there and I was the only one that was able to cross the line all the time."

Matt Graham of Australia was second and Ikuma Horishima of Japan was third.

Brenden Kelly of Pemberton, B.C., was fourth, Kerrian Chunlaud of Ste-Foy, Que., was seventh, Laurent Dumais of Quebec City was 10th and Gabriel Dufresne of Repentigny, Que., was 19th.

The dual moguls competition pits skiers in a head-to-head, match-play format. The fastest athlete down the mountain, while combining technically-sound turns and air, moves onto the next round until the champion is crowned.

Kingsbury fractured his T4, T5 vertebrae during a training run late last year, and the back injury caused the reigning Olympic champion to miss the first three World Cups of the season.

Since then, Kingsbury has won all four events he has competed in — two World Cups and two world championships.

"(It was) one of those days where the course was very hard," Kingsbury said. "It makes us look not very good but it was super fun to ski and super challenging. I love those kinds of conditions and courses. When it's hard, it brings the best out of me. I'm just extremely proud to be a two-time world champion again."

Anastasiia Smirnova of Russia won the women's dual moguls event at the worlds.

Sofiane Gagnon of Whistler, B.C., was fourth, while Montreal sisters Justine and Chloe Dufour-Lapointe were ninth and 19th, respectively.

Gagnon had only two starts in the past two years while recovering from a knee injury.

“Today was definitely a special one for me," said Gagnon. “My last duals event was at the world championships in 2019, so I was really excited to step back into the gate for this event after two years. Returning from a long rehab and walking away with a new best result really meant a lot to me.”

This report by The Canadian Press was first published March 9, 2021.