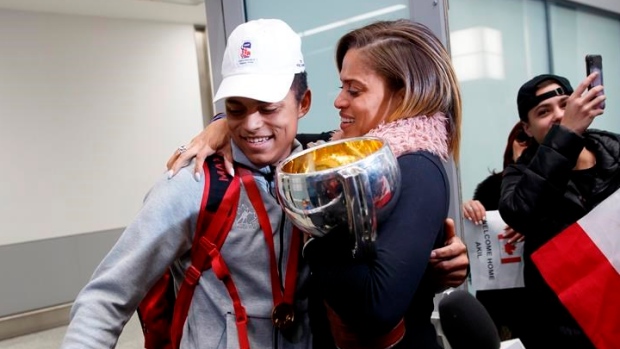 TORONTO — Canada captain Barrett Hayton had the honour of being the first to raise the world junior championship trophy before letting his teammates have their turn.

After returning to home soil on Monday, Hayton got to hand off the trophy to one of the team's biggest supporters.

Akilah Thomas, whose son Akil scored the winning goal in Canada's 4-3 win over Russia a day earlier, helped organize a group of over 30 friends and family members to welcome the players home at Pearson International Airport.

She got choked up when Hayton handed her the cup while she waited for her son to make his way into the arrivals area. She couldn't contain her emotions when Thomas finally came through the doorway.

A crowd of about 100 supporters in all let out a roar as they embraced, the gold-medal game hero sporting a big smile and shiny gold medal around his neck.

"It's pretty overwhelming obviously," he said. "A lot of friends and family are here. The last 24 hours have been pretty crazy. I'm just thankful."

Thomas's goal with 3:58 left in regulation was the difference as Canada hung on for the victory in the Czech Republic. The players had little time to celebrate with many catching flights Monday morning for destinations around the country as they return to their respective junior teams.

"We still haven't slept yet," said Foudy. "The guys are pretty tired. We're excited to get home."

Hayton fought through the pain of a shoulder injury to score the tying goal before Thomas potted the winner. Hayton was a rock for the team, helping guide the Canadian side to the podium after an uneven start to the tournament.

"I think there was some adversity early on," he said. "I think from the start we wanted to get better every day. I thought we did that extremely well."

Hayton had the trophy on top of his luggage cart as players emerged from customs in small groups. Thomas was one of the last players to enter the arrivals area and his mother could hardly wait.

"He messaged (Sunday) morning and said, 'Mom we're going to get the gold,'" she said. "He called it. He did it. He delivered it. It was so many emotions.

"I just held on to him and I just felt my heart pounding. I just thanked him."

The win gave Canada its third world junior crown in the last six years. It was the first time Canada had won U20 gold in a European venue since 2008.

"I just had a good feeling about the game," Thomas said. "We were obviously playing well. I grew up watching those type of games. Things happen quick in those types of games. You can win in a blink of an eye.

"I just got an opportunity and I made the most out of it. Luckily I scored."

Canada looked suspect at times in the opener of the preliminary round, a 6-4 comeback win over the United States. That game was followed by a deflating 6-0 loss to Russia.

However, Canada built some momentum after that and shone when the games really mattered, outscoring opponents 15-4 in the playoff round.

Canada was eliminated in the quarterfinals last year when it hosted the tournament. The 2021 event will be held in Edmonton and Red Deer, Alta.

Canada has reached the podium 32 times at the world juniors since 1977. Canada has won 18 gold, nine silver and five bronze.